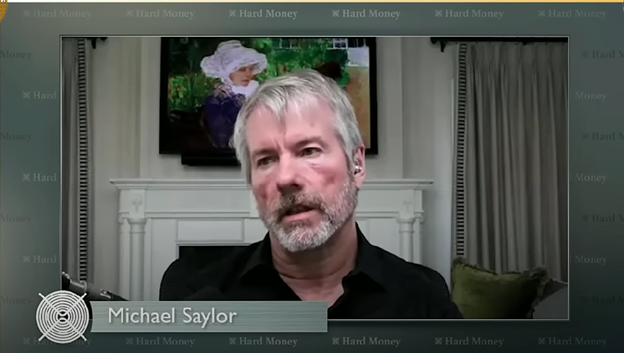 ‘You know, I think Ethereum’s a security. I think it’s pretty obvious it’s a security camera. It was issued via an ICO. There’s a management team. There’s a pre-mine there. There’s a hard fork. There’s multi, you know, there’s continual hard forks. There’s a difficulty bomb that keeps getting pushed back. The difficulty bomb is going to wipe out the entire eastern mining industry. It’s going to obliterate it. It’s okay. The fact that somebody is able to murder an entire industry and then they keep changing their mind every six months about whether to do it or not, isn’t disha that it’s a security and not a commodity.’ – Michael Saylor.

Michael Saylor, the CEO and co-founder of business intelligence and analytics for a Microstrategy, recently named ether, the native token of the Ethereum blockchain network, as a security and not a commodity. In a recent interview with Altcoin Daily, Saylor describes Ethereum as an obvious security risk since the team of developers can decide to make changes to the network without the approval of participants. But before we examine speech deeper, note that with 3 days of trial access, the Jet-Bot binance copy trading platform allows you to automatically copy the best traders. You don’t need to deposit fund to the platform and can connect your Binance account via API keys.  People should rest, robots should earn crypto.

He adds that anything that can be described as a commodity in the crypto trading space will have similar qualities to gold, meaning no team of developers, decision makers, or hard forks or upgrades that can change the way the network behaves. Since Ethereum has all these qualities, Michael Saylor is convinced that the second largest cryptocurrency network is a security even though ETH and BTC have been described as commodities by the heads of certain U.S. regulatory agencies and lawmakers. The newly introduced bipartisan bill from senators Cynthia Lummies and Kirsten Gillibrand classifies Ethereum as a security figure ahead of the Securities and Exchange Commission, SEC and the Commodities Futures Trading Commission, CFTC.

CFTC has also made similar statements in the past. Does Sailor disagree solely because he is a bitcoin maximalist or because there is indeed a need to examine Ethereum as a security and not a commodity?

‘For it to be a commodity, there has to be an issuer, and the truth is that you can’t really make decisions based on it. One of the fundamental insights in the crypto industry and bitcoin copy trading is that the fact that it can be changed is what makes it secure. So if you look at most of these cryptos, where they have hard fork after hard fork, the problem with a hard fork is that changing the protocol means that some development team is making a decision, and if you can change the protocol in a material way, you can change the monetary protocol. So a hard fork can change the issuance pattern or can change the value of something, and that makes it an investment contract under securities law. That means it passes the Howie test.

So what you want is a completely decentralized protocol where nobody can change it, even if they wanted to change it fundamentally. The problem with Ethereum is that they keep changing it right from a securities law point of view, and there’s a team of people that make recommendations.

If you want to establish yourself as a digital commodity, you’re trying to create something that’s like gold in cyberspace, so, for example, no gold miners in the world could change the physical characteristics of gold. If a government passed a law, I mean, they wouldn’t send an email saying, “Oh, gold is now steel or steel is now aluminum,” right? You can’t. If you can change the characteristics of it right, then it’s not a commodity. It’s a security, and securities have a place in the world, but they need to be sold to the general public pursuant to a full and fair disclosure. If you want to take the company public, you have to disclose who owns the company, what the risk factors are, and that way people can make a decision.

The problems I see right now are that you know you’ve still got the ether locked up and will the merge take place or will it not take place, and then after it takes place, the question is how long is your ether locked up. If there is a staking reward, what is that? If there is a stake reward, it’s probably a security. The Head of the SEC is set on six different occasions.’

In his interview, Saylor also speaks about whether or not other cryptocurrency networks are truly decentralized. He argues that the presence of decision makers and other blockchain networks dilutes decentralization and the very core of the cryptocurrency space in the blockchain industry. True decentralization refers to the transfer of control and decision-making from a centralized entity such as an individual group or organization to a distributed network. This helps to reduce or completely eliminate the level of trust that participants must place in other people.

With true decentralization, as the centralized authority will have as much control over the functionality of the network as the other participants, this usually means they will need the permission of a majority of participants to effect changes. As Saylor explains in his interview, not many blockchain networks really follow these principles.

‘If you look at the Solana thing from two weeks ago, the fact that you could vote on something is proof that it’s a security. For example, my company votes on things. Shareholders vote on things. When you take a shareholder vote, it doesn’t make you gold. There’s no way that the gold owners or the gold miners could take a vote and convert gold into aluminum. See, and if I owned a bunch of lumber, I couldn’t take a vote and turn the lumber into steel.

So ultimately, the challenge with these things is the ability to do anything. If it’s truly decentralized, then you have to release at least the protocol into the world and not change it. Do not even think about changing it.

In fact, you know that one of the big problems with all these proof-of-stake networks is that in order to get them to work, they have to keep doing hard fork after hard fork, and the reason they’re doing it is because they’re putting the security into the software instead of into the hardware or into the physics. If you’re relying on the physics of the network, then you don’t have to keep upgrading the software. If you keep upgrading the software, then someone’s got to write the software. When you write the software, you end up with this exploding complexity. Then you have to know you have to keep changing it . As a result of this constant pursuit of functionality and performance, that’s what makes you a software company.’

Is Ethereum a security or a commodity? During a CNN interview last month, Senator Gillibrand stated that both the SEC and CFTC heads agree that BTC and ETH are commodities. Gary Gensler, the chairperson of the SEC, seemed very reluctant to describe ETH as a commodity. But Gensler noted that only certain cryptocurrencies are commodities, while others are securities. However, he refused to mention any others except for bitcoin.

According to Gillibrand and Lummies, a digital asset can either be a commodity security or an ancillary asset, which Lummies explains could include non-fungible tokens or digital assets that are not stores of value or means of payment.

On the other hand, securities would be defined using the Howie test, which stipulates three criteria for establishing assets that are securities: there must be the investment of money in a common enterprise and with reasonable expectations of profits to be derived from the efforts of others. Tokens that confer voting rights, dividend payments, or profit-sharing revenue shares on their holders will be considered securities. If you’re like Bitcoin and creating a proof of work or a proof of stake type of token, you may well be a commodity.

In an interview, Gillibrand stated that BTC and ETH would certainly be commodities, and that’s agreed upon by chairman Gensler as well as the chairman of the CFTC. She added that, as he has proved in the CNBC interview, Gentler might not be fully convinced that Ethereum is a commodity and Gensler’s is an opinion that really matters. Saylor has argued that Ethereum is a security. Any other person can argue otherwise with sufficient proof that Ethereum is a commodity. But if the SEC or any other regulator finds that the crypto asset is a security, then that would create a lot of confusion and chaos.

What do you think about Michael Saylor’s interview? Is Ethereum a security like Bitcoin, or just another cryptocurrency that can be regulated away by the SEC?