GT-Protocol Blog What Everyone Is Getting WRONG about Bitcoin & Inflation! (Crypto Ready to Pump) 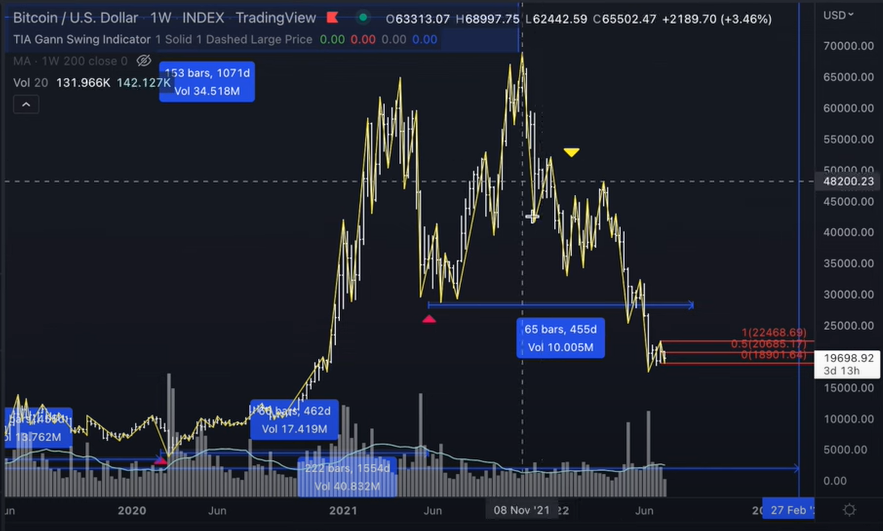 Bonjourno! Let’s update the markets, especially after the inflation news came out and what I think everyone is getting wrong about bitcoin inflation, what’s going on with cryptos, and, of course, the economy. let’s dive into this piece of information that everyone keeps getting wrong time and time and time again. So, let’s start with the short-term time frame for bitcoin.

Then we’re going to answer some of the larger term time frame questions and also look at some trading opportunities in cryptocurrencies in this environment where there’s been a ton of bad news about inflation 9.1. The highest on record for decades now. But, what we’re seeing is the price not dumping as hard. Remember, we’ve looked at this on the channel heaps and heaps of times and our members get this. Now, you are watching understand this when we see the bad news not affect the market as we expect it to or at least what the retail would expect it to you can start to see the end of the trend. I’ll repeat that again but we’ll talk about in terms of the highest we’re looking at the bull market tops we had a lot of talks about bitcoin going to a hundred thousand dollars never happened. The price stopped moving up looking at the bitcoin price here on a larger term time frame we had tons of good news at the top. You can remember all of the bullish-only channels the guys, who continue to go on about bullishness talk about 100k bitcoin, and the market just was not pushing up any higher. That’s what we saw back here in October.

We saw it in November. We also saw it in April and May of 2021 and there are receipts on the channel. If you need those things but that was specifically what I was talking about. I went on other channels as well at that time saying these prices aren’t moving up people were calling for 80 000 bitcoin at that time that was the big call lots and lots of extreme excitement next thing. We dump to 29 000, so we’re seeing the same thing in reverse now. We’re seeing a ton of bad news. You’re seeing a lot we’re all seeing a lot of uh data inflation being way too high we are seeing the possibility of a recession and even talks over and over and over again about recession. We’re just hearing a lot of bad news. I see it in the comments as well people saying you’re forgetting about this piece of data you’re forgetting about that think about it. It, honestly, doesn’t matter when you look at the cycle and that goes for the same when you’re looking at the peak of the cycle just think about all of that good news all that on-chain data and bitcoin. Just as an example all that on-chain data that came out throughout this entire bull market and the bear market and they were all wrong. They were all wrong because they are just only looking at one side of the equation. They’re just looking at one piece of data and then trying to say well.

This is happening, therefore, this must happen and they completely forget. They all get the cycle wrong every single time and so that’s why this thing continues to repeat time and time and time again now I’m not trying to say that I’m always 100 right. All I want to do in the market my only job as an investor as a full-time investor is just to take a slice of some of the biggest slices. I possibly can and maybe the slice of the cake isn’t that big. Maybe it’s only this little section here but either way. I want to take a slice out of the middle then get out of the market and just wait and that’s what we have successfully done with cryptocurrencies trading altcoins getting in and out of them not investing in them. At the moment I think there’s still plenty of time for all coins, but there are trading opportunities right now, so these are some short-term stuff.

The things that everyone. In my opinion, of course, what is getting wrong is, of course, the cycle. The cycle is something that we’ve talked about on the channel for many many months now looking back even in 2021. We weren’t expecting 2022 to be too good for cryptos and for the stock markets. We’ve seen that now we saw a peak in January. But you can see the market was basically peaking out in November. It didn’t really go much higher this is the Dow Jones and then we basically crashed from that point and you could almost say that you wouldn’t have cared if you were out of the market in may because the market really didn’t go that much higher into January. So, you could have six to eight months of basically not much gains in the down. If you want to look at the S P the top 500 companies in America. You, basically, had a peak here in about August the market didn’t go that much higher in November or into January. Then we’ve since crashed from that point we’ve been looking at the lay areas for where this could come down to and all along since this top came in because that’s how we can use our 50 tool. We can see that we’ve been waiting for about 3 500 points as a reasonable support zone for the s p and for the NASDAQ we’re at 11 700. At the moment we’re bouncing around the 50 levels right now.

So, there’s been some further downside targets that I’ve got in mind somewhere around 10 and a half thousand and down to about 8 900 points. I think underneath that level. That’s a real danger zone for the tech sector you know traditional markets for stocks and things like that. But, right now we’re sort of bouncing around in zone. We’re bouncing around the 50 level on a macro time frame here on the weekly chart. Should we get down to 10 and a half on NASDAQ? Not too bad. These are all sort of part this is all part of what’s going on in the economy in terms of the re-pricing of stocks in the US and everyone is extremely fearful about this inflation news and everything has to come to an end but we’ve seen so much bad news for the last couple of months. We’re now in mid-July. You can see back from May when that last bit of data came out the market tanked into about 11 700. We’re basically at that same price right now two months later. Even though, maybe, you disagree. But, I think the news and the market sentiment the fearfulness in the retail investor has gotten a lot worse.

But the pricing hasn’t gotten worse. So, not to repeat what we said we’re looking at the peaks are the same thing happening in reverse. We only have a little bit further to go. Maybe, we only head down to 10 and a half for the NASDAQ. But, let’s use the s p it’s the top 500 companies maybe we only head down to the 50 levels which have happened many times you’ve seen that on channel 3 500. So, the main message here is the worst is most likely over, in my opinion. I think the majority of people are getting that absolutely wrong regardless of if the word inflation pops up again or if it goes into a technical sorry recession pops up, or if it goes into a technical recession. The worst is most likely over the main thing that we look at which has not gone into recession and will not go into a recession in 2022 as I did in an interview with the legendary economist Phil Anderson here. So, we did a three-hour live event talk in Australia on April 29th. Everyone understood this and got the idea of the cycles and how to invest long term, you can purchase this.