GT-Protocol Blog Warning: Bitcoin Does This EVERY TIME BEFORE It Crashes Crypto 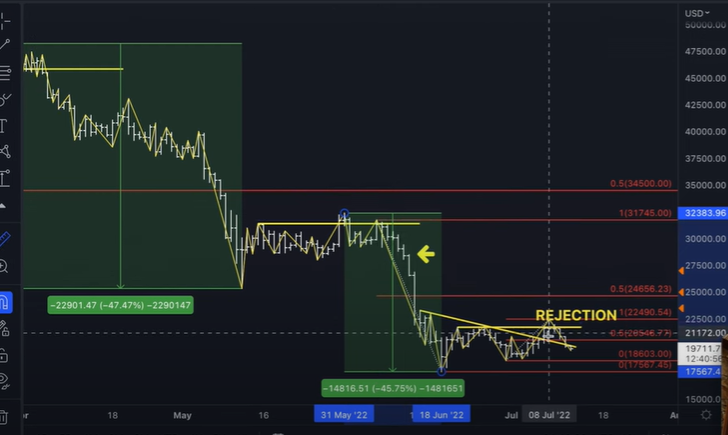 Bitcoin has done this exact pattern every single time before. It crashed cryptos during this Bear Market which began in November of 2021. We’re now nearly nine months into the bear market, and this patent has played out each time, leading to 36 to 46 dumps on bitcoin. We are 13 down. Let’s take a look at how much further we could go down in terms of price and how much longer we have to see until this. You are getting the drift of how this is working out and looking at our trades and longer-term investing as well. We’re looking at both sectors here using trading to invest in the long term so let’s take a look at the video today.

We’ve followed this up over the past several days starting with the video here on the seventh. Now there’s a lot more detail on these videos. So, let’s get to the update, but for anyone that has missed this is essentially what we’re looking at a weak Bitcoin bull market. I was hoping for higher prices around 24 and a half thousand. But, what I hope for and what actually happens in the market are two different things that we all hope for doesn’t mean it’s going to happen. We have to look at what’s in the facts on the charts and what the market is telling us. What the sellers are doing and what the buyers are doing and we can see this in real-time using the charts. That’s why we avoid the news to make decisions on and we use the charts to make decisions that are going to help us. So, this video specifically looks at that Breakout what happened the following day. Well, we got the breakout so this has started to play out the pattern for the crash begins with the run-up you need to move up before we can get the crash. So far, this has been working out to a T and then from that video on the eighth to the video on the 9th of July. We were looking at the rejection on bitcoin where this can get rejected and the patterns.

We don’t want to see the probabilities from the weakest to the strongest. If you start seeing the weakest and that gives you signs of their potential shorts coming up for trading rather than trying to catch a falling knife maybe it’s better to go with the shorts. If we’re looking for longer-term stuff sit back and relax and wait for the bigger-term pictures, which is what we’ll look at in videos coming up this week. There are some really good patterns coming up. This was the rejection and then the patterns that we didn’t want to see so the ninth in terms of didn’t want to see this is looking at the weakness. This is where we are now. You can see we’re several days down from this video. Remember, we’re looking at these specific patterns and what the buyers and the sellers are telling us if a particular pattern plays out. If we get the pattern that plays out with the rejection obviously the sellers are in control and then from that point the sellers take control and they start to look for the next support level. If they found support at 20 and a half thousand dollars that would then tell us that they buy they’re going to be more buyers in control. It’s going to be a much stronger Market we use the 50 tools here to let us know where the balance is in the market and where the buyers are looking to get stronger and that gives us a much deeper understanding of what is happening in the market now. The buyers didn’t step in at that point.

Therefore, we now know we’re in a weaker side of the market and the emphasis has to go with the Bears so the Bears are in control. They’ve broken the 50 they’ve come down and pretty much one of the last saving Graces for the Bulls in the short term is this area here and that area is between the low which is 18 600 and where all these closes came in here. You can see it’s around nineteen thousand three hundred dollars. So, we’re still just above that at this point in time. The Bulls still have some balls left but it is fast running out the idea is that they can hold up here at these levels and then push the market back up now the weakest side to this is where the Bulls will lose their balls.

If we get rejected at twenty and a half thousand dollars on the way up and start to plummet from that point and we could be then pushed into a more significant low that would show a lot of weakness and probably further downside and come back to test the 18600 level and potentially the 17 and a half thousand level. There is some silver lining to the end of all of this. We are in July getting to the mid-middle of July and since February which is when the video. I put out on the channel looking at the cycle of Bitcoin the Bitcoin four-year cycle. We are getting closer to the end of this bear market in terms of pricing dollar cost averaging area doesn’t look too bad. I’ll look at that in just a second but just looking at the specific time frames here to tell us the news what’s happening in the market right now. This is the weaker test to the 20 500 from this point maybe we fall to the 18 six and test it but anything tested underneath the 20 and a half thousand is very weak for Bitcoin and probably the majority of cryptocurrencies the stronger setup for the long side for a bigger push to higher prices for a bigger trade opportunity for cryptocurrencies to go long in cryptos.

Of course, Bitcoin is a break above twenty and a half thousand and then a re-test to the top side of the 20 and a half thousand dollars. So, that’s what is required now so this has happened the last few times for Bitcoin every time this happens before a crypto crash. This is what we’ve seen the market drop come up for a bounce and then get rejected on the second attempt at those prices and that happened again this is the fourth time that it happened. Of course, if you’re watching the charts maybe watch this channel. What’s happening out there and all of the noise we can see this happen in advance and get set up and not get caught out each of the last times.