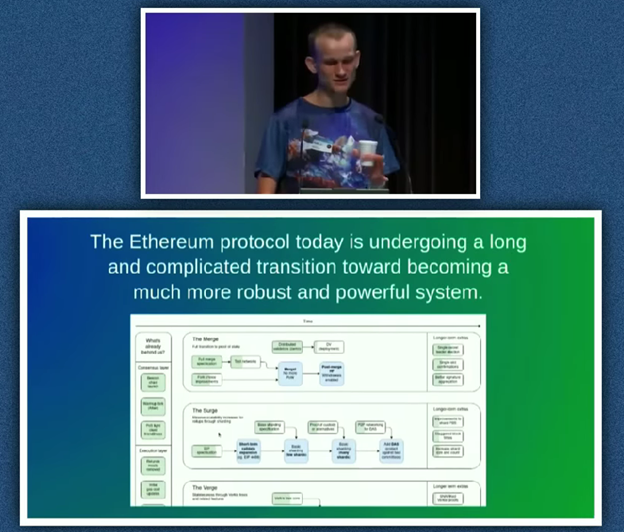 The difference between Bitcoin and Ethereum  is that Bitcoiners consider Bitcoin to be 80% complete, but Ethereans consider Ethereum to be 40% complete.’ –  Vitalik Buterin.

Since there are great news about Ethereum, make sure you’ve register at Jet-Bot crypto trading platform. It has a fantastic welcome offer that you can take advantage of right now. You can get 3 days free trial to experience Binance copy trading bot. With this option, you can earn APYs ranging from 200% to 2,000%. Copy-Trading allows you to follow the Top-Trader deals and earn profits 24/7 without any efforts or issues for you. The average monthly profit is +21%/month.

While speaking at the Ethereum community conference in France, Buterin shared future developments he envisions for the platform and how they will each improve the network. He begins with the merger, the joining of Ethereum ‘s main chain with the proof of stake beacon chain, which would facilitate the transition to the less energy-intensive consensus model.

Buterin explains that the merge will bring the Ethereum  blockchain network to 55% completion from the current 40%. This would mean more updates and upgrades for the most popular altcoin network in the future.

According to the Ethereum  co-founder, these upgrades include the verge, surge, purge, and splurge. In addition to the cool rhyming names, each of these upgrades will greatly benefit the network and get it closer to being completed as Buterin and his team envision. We will now take you to Buterin’s important update about the Ethereum blockchain and the team’s post-merge plans.

‘So there’s a lot of stuff to do and prove at stake. The end state of all this will be a proof-of-stake mechanism, which is really great, but in order to get there there’s like all of this work that needs to be done.

The surge is sharding. So basically, I think before we wanted to do 4488, we decided that we would like to rearrange the numbers a bit, so instead we’re doing 4844, which is proto-dink sharding. Uh, basically trying to kind of lay the groundwork for doing full sharding, kind of having all of the data formats in place and also adding at least a little bit more data space that rollups can use to make rollups much cheaper. You know, it could even be ten times less expensive.

That would be something that’s like the prototyping chart. Then we want to do dink sharding, which includes data availability sampling. At that point, we want to do like other things around us, just increase the amount of space that we have some kind of fast confirmation so that Ethereum  can have not just greater scalability but also lower latency, at least until you get some degree of confirmation that your transaction has been included.

The verge of stateless clients: you will be able to verify Ethereum  blocks and even be a validator without having hundreds of gigabytes on your disk, which is great for decentralization. So we are trying to actually cut down the amount of space you have to have on your hard drive by trying to simplify the Ethereum protocol over time and not requiring nodes to store history and then just like this big long list of things right.

The difference between Bitcoin and Ethereum  is that Bitcoiners consider Bitcoin to be 80% complete, but Ethereans consider Ethereum to be 40% complete. This is something I’ve said a couple of times before.

When you look at what Ethereum  is trying to accomplish, you know it’s true, right? The Ethereum  protocol is like really trying to still try to fulfill this role of being some kind of secure base lawyer, but trying to do so in such a way that it actually has the functionality that it needs to be a secure base layer for the stuff that people actually want to do. That does involve adding more features. It does involve doing more work. At the same time, kind of there you are. There is also this kind of end goal, but you know, we’re a bit further away from getting there.

I’d say it’s 50%, and ETH can go up to being 55% complete after the merge, so we’re getting close. I think we’re getting close to kind of the second half of this kind of big long vision, which is really amazing and, you know, all of the people that have been working hard to make it happen should be super happy at this point.’

The surge will bring additional sharding solutions, which, according to the team, will further enable cheap Layer 2 blockchains and significantly lower the cost of rollups. The move from 15 transactions to 100 000 transactions per second.

The verge will allow users to become network validators without having to deal with large amounts of data, while the purge will help the Ethereum  blockchain get rid of old network history.

The last but not least, the splurge, according to Buterin, will include all the other fun stuff. This is quite an undertaking for the team, but they seem quite excited about embarking on it.

They’ve already had a lot of experience with the merge, so these next upgrades should come in faster.

Let’s get back to Buterin’s broadcast, as he outlines how all members of the Ethereum  community contribute to the development and completion of the network:

The switch from proof of work to proof of stake is going to decrease issuance from $5 million a year to this kind of weird math equation that’s like 166 * sqrt (total_deposits). If there’s a million, if he’s staking it’s 166,000. If there’s 100 million, he’s taking it only goes up to 1.66 million. In all cases it decreases by a lot. It’s not fixed. But it’s much lower than it used to be.

In the short term, there’s all of this kind of stuff that I  do think needs to be done. However, in the longer term there is also this challenge  of like shifting down the gears again, and actually settling into this new normal of.

Ethereum actually being this kind of dependable system that at some point is going to change very infrequently. It’s not even just for core developers. It’s also like there are lots of things that people just about anywhere in the ecosystem can do to contribute to this. There’s lots of things that just people out there in the community, even people out there in the application layer, can do to kind of contribute to this.

Make sure that your application continues to work and even works better in a world where the Ethereum protocol is kind of upgraded in a bunch of ways, and at the same time, the layer two teams. If layer one is going to slow down its rate of change at some point, then to the extent that change is still required, the larynx protocols are going to have to pick up the mantle. I think our layer 2 ecosystem is great and that’s going to keep becoming even greater.’

Following the 7 to 5 basis point interest rate hike announcement from the U.S. Federal Reserve, the crypto market suddenly started registering a huge price spike on Thursday. By 12:28 EST, Ethereum had risen more than 5% to $1,723, its highest price since early June.

What do you think about Buterin’s Ethereum  update and the latest revival of prices in the crypto market? Does this mean prices have bottomed or are you still expecting some huge downsides?