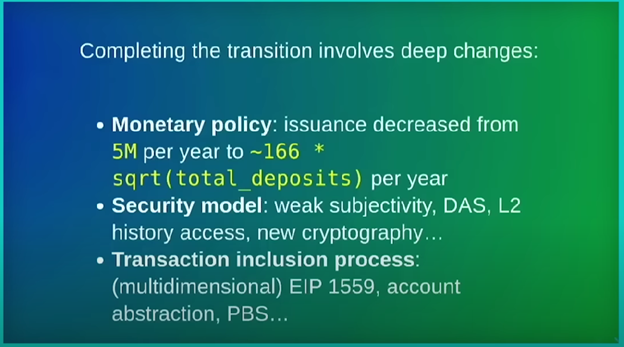 ‘So this is, I believe, both my preference and my impression of something that many people want for the Ethereum protocol, which is for Ethereum to eventually settle down.’ – Vitalik Buterin.

As a key note speaker at the Ethereum Community Conference, the largest annual European Ethereum event focused on technology and community, the co-founder of Ethereum, Vitalik Buterin, gave a heads-up on what to expect for the September 22 update of the second biggest coin in the crypto trading market.

It is currently trading for $1,424.00, a 7% decrease over the last seven days. The Ethereum network gained traction after Vitalik provided a firm date for the merger, which is set for September 2022. In the speech, Vitalik named five stages of growth for Ethereum: the merge, the surge, the verge, the purge, and the splurge. While it will be quite lengthy to get into the particulars of each stage, Vitalik did offer a very clear vision of what Ethereum holders should expect, which he called ‘deep change’.

And, before  we listen to Vitalik, note that Jet-Bot, an official broker of the Binance exchange, is one of the best websites for staking your cryptocurrencies for passive income. Jet Bot got 100% rating at CoinPayments website according to 7000+ users feedbacks. You may earn a much higher return than you would in a traditional bank, so it’s safer to keep them at Jet-Bot, which has more safety measures in place to secure your cash. You can connect your Binance account to Jet Bot platform via secure Binance API connection. Jet-Bot copy trading platform supports both spot and futures copy trading bots trading on Binance.

The switch from proof of work to proof of stake is going to decrease issuance from $5 million a year to this kind of weird math equation that’s like 166 * sqrt (total_deposits). If there’s a million, if he’s staking it’s 166,000. If there’s 100 million, he’s taking it only goes up to 1.66 million.

This is the idea that you can literally have a blockchain run without needing even a single node to process the entire chain, which is something that, from a blockchain point of view, is very fascinating and mind-blowing. From a kind of broader distributed systems point of view, it’s like totally common sense, right? Nobody would even consider creating a version of BitTorrent in which everyone is required to download every movie.

That’s how blockchains work today, so trying to kind of combine the actual distribution, like that you see in peer-to-peer networks, where you actually have different parts of the network responsible for different parts of the data with the security properties that blockchains provide, right? This is basically what Ethereum is trying to go towards. That does include some changes to the security model.

For a lot of dApps that are built on ethereum, historically, they’ve relied on this assumption that you can use things like history access. You can look at historical logs. You can look at historical transactions and the dApp from like you directly using the Web3 protocol would be able to just like tell you the entire history of everything related to you that happened in the dApp, right?

And the reason why it has to be done is basically because, uh, people value scalability. If we want scalability and if you want decentralization, so like the ability to run nodes easily, then you just can’t require nodes to store this kind of constant, ever-growing amount of space.

Now there are alternatives. There are plenty of very secure, very decentralized ways to store the history that do not involve requiring every single ethereum node to store the history . For things like the graph, there are second-layer protocols. There is work that’s being done by people in the portal network. There’s work that’s being done by some other groups. People are attempting to upload a piece of Ethereum history. It’s a BitTorrent. There’s block explorers, of which there’s like a bunch. You can probably make a multiplexer that just keeps on asking each one of them and you can even make a protocol that like asks them for proofs to make it more secure.

There’s lots of alternative ways to access history, but that’s not going to be like something that the Ethereum protocol itself is directly responsible for, right? That’s a change to also a change to the security model now. It is a change that I think dApps have already adapted to. If you use dApps today most in the access history most of them have access history. You are not going to use the Web3 APY directly. Lots of them already use the graph. So this is something that I think the ecosystem is already adapted to. But it is a change that is a kind of unnecessary part of Ethereum’s becoming more decentralized and more scalable.

For security, the ethereum of 2015 relied solely on catch up hashes and elliptic curve cryptography. With just those two ingredients, the ethereum of 2023 is going to rely on that plus more complex uses of elliptic curves with things like vertical trees. If they come in 2023, it could be 2024 as well. It is also elliptic curve pairings, which is a more complicated form of below the curve math, which the Beacon chain already relies on, some universal trusted set up for data availability sampling, potentially. The randomness is going to be augmented by VDF as well.

There’s also like some new cryptographic assumptions that are being introduced. These new cryptographic assumptions give us a lot of really massive benefits, so like the ethereum of today that uses BLS signatures that rely on pairings that allow us to have hundreds of thousands of validators, which allows us to have a ledger of people stake if they directly with a minimum of 32 ETH.

Does anyone remember what that minimum was before we decided to use BLS? The answer was 1500. We added a security assumption and/or a new cryptography, and the benefit is that staking became 50 times more accessible. Basically, there are very real benefits that are going on, but also the real changes here are in the transaction inclusion process.

EIP 1559 happened last year. It was amazing. It changed a lot, but it also changed a lot about how we have to think about including transactions. Account abstraction. Basically, people being able to send transactions that are verified not just by elliptic curve signatures but by whatever kind of algorithm they want. You could have better multisigs, better smart contract wallets, better social recovery wallets, move to other algorithms. You could also use a signature aggregation to have much smaller signatures. This is really powerful in roll-ups.

So here’s the ERC-4337 team. This is the team that’s working on the account abstraction of EOS right now. They’ve started to do this, and with signature aggregation, you’ll be able to remove the 65 bytes that are the signature from every transaction and replace them with just 65 bytes for an entire block. Potentially, rollups could become three times cheaper if this is all implemented.

It’s also involved building a much stronger and much more capable research and development ecosystem. That’s capable of coming up with these changes, testing them, making sure that they actually do what they need to do, implementing them, implementing them across five clients, making sure they’re implemented the same way across five clients. If there were no bugs and they were doing that entire pipeline and actually getting them to production.

There’s a lot of stuff happening, but and this is where it gets to kind of the more cautionary part of the talk. That doesn’t mean that we should keep going this way forever.’

What do you think of Vitalik here? If you’re not an Ethereum holder, does the merge in September make you more interested? If you are an ETH holder, are you confident that ETH can pull off the vision in a timely manner?