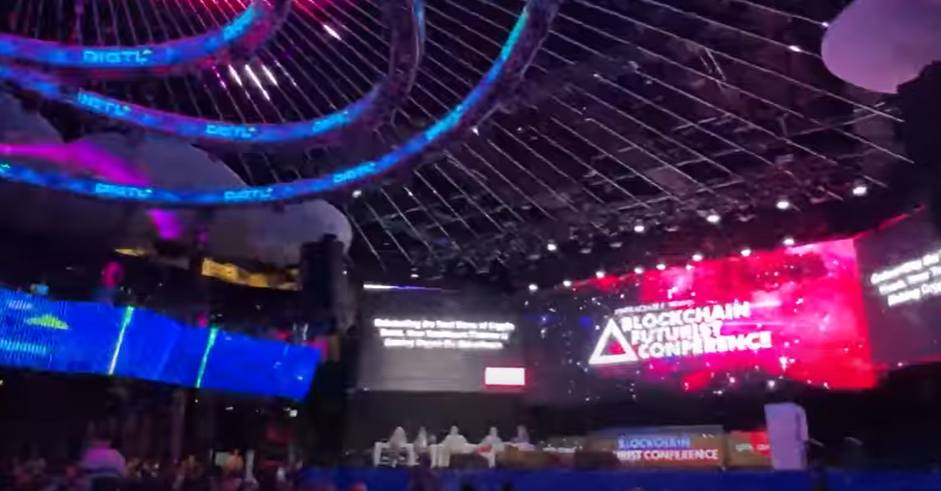 Now let’s talk about what has happened in the last 24 hours absolutely amazing yesterday. I was at the futurist conference here in Toronto. All right, so we are heading down to the blockchain futurist conference. A very special speaker is going to be speaking a little hint for you. Let’s catch our ride and I’ll see you all down at the blockchain conference. We’re here now at the Venue. It’s a nightclub which is actually really pretty cool. So, I’ll give you all a tour of a beautiful day here in Toronto. We’re like right on the water and our friend is about to speak. So, let’s get in there.

It was awesome and it was really cool to see Vitalik speak Ethereum. The rest of the market today is going absolutely crazy looking at these beautiful sunny views and absolutely loving life. I want to share some of my thoughts on the current market and then how you can stay ahead of everything right now. Ethereum is approaching 2000. A lot of the alt coins are starting to run and it’s now altcoin season and it was at a 98 on the indicator yesterday. So, if there’s been any indicator that all coins are about to explode and are already starting to explode. It’s happening now. The best time to get into all coins personally is when it’s bitcoin season and they haven’t already gone up like crazy. But, I still do believe there is a ton of opportunity in a lot of these altcoins in the short and long term. Let me explain what I mean by this. So, if you take a look at a coin like Avalanche or Solana or even Cardano. They’re still down massively from their all-time highs, so I think long term.

I’m talking years out. If they do go back to their all-time highs and beyond today still is an insane opportunity for buying now in the short term. Though we could see these alt coins again still make a nice little push. But, then ultimately potentially coming back down. So, it really depends upon your strategy and what your time frame is as an investor now. In other news we have ripple labs looking to purchase and acquire celsius. The Sell token is absolutely exploding it went from literally 50 cents. When they announced their bankruptcy to over two dollars today my biggest mistake was not buying a Celsius token at 50 cents. I literally was at the computer. I saw the price and thought about doing it. But, I think what it was for me was there wasn’t a lot of liquidity. So, I didn’t end up buying a huge mistake and I don’t know if buying that token right now is also a good idea. I don’t know if there’s just too much unknown about what’s happening with that company. It’s something to keep an eye on certainly. But, XRP that token is one I would start looking at even more because there have been rumors that they want to buy a lot of new cryptocurrency companies. If they do end up acquiring Celsius and make it right and do it the right way and figure out something with that I think that the XRP token could absolutely explode. I do think that it’s one of the only projects that banks will actually use and start using right away. I think it’s been suppressed for way too long. Once it does get settled will eventually catapult XRP to new all-time highs and beyond I truly do believe it will absolutely Skyrocket.

If things settle in the right direction, so that’s another one. I know I talk about a decent amount on this channel. But, absolutely going crazy another cryptocurrency coin that’s just exceeding expectations right now is HEX. As always hitting right around six cents today at the time of this recording. He’s talking about that cryptocurrency for about three or four cents. I’ve been talking about it since 20-30-50 cents. I still have massive conviction with it. It’s definitely a higher risk, higher reward crypto. You have to really understand what you’re getting involved with. But, there was a tweet that said that you would have taken your twelve hundred dollar stimulus check. You would have bought HEX. Then staked it you would have had over a hundred and twenty five thousand dollars plus another forty thousand dollars in interest that’s absolutely insane. So, approximately, a hundred and seventy thousand dollars just by buying and staking HEX. If you would have just taken your stimulus check at that time now. Of course, the price has gone up, that’s why it’s an interesting tweet. But, I do believe that if hex ever gets back towards its all-time highs. Beyond it’s one of those cryptocurrency coins that can just absolutely go crazy. We have seen so much with the crypto that there was a point in its life cycle where it went up and then that was it.

It never retracted and so that is one that I absolutely love because with your own keys you get to earn up to 38 API. If you stake it like the largest length was like 15 years and you’re constantly earning interest in the cryptocurrency coin just by buying, holding and staking. It’s literally how defy is supposed to be and to me by using these other third parties like celsius nexo BlockFi. You’re giving away your cryptocurrency and hoping that you’ll be able to get it back where HEX. You’re not giving it to anyone it’s just you and the smart contract which has been double audited has never had a single issue. It’s been absolutely flawless for the last approximately two years to me. HEX is one of those cryptocurrency coins that was just built and done correctly. I don’t see it going away anytime soon. Also we’ve talked about pulse x and pulse chain. I think those two cryptocurrency coins are going to be coming very soon. How soon it could be a week, it could be two weeks, it could be a month, it could be three months.

But, I think it will be here sooner than we believe it to be the last that I heard about pulse X. Pulse chain is that it’s basically done. They’re just working out a lot of the little details and bugs just to make sure that it is absolutely flawless when it comes out. I do think that Richard Hart is still waiting for the right time to launch this project. He knows what he’s doing. I have full faith in him. I truly do think that these two projects are going to be absolutely fantastic. I think this whole new ecosystem with pulse chains is going to be very intriguing to see how it develops and how value is going to be added to the chain. How it’s going to work I think it’s going to be a new fun game to play and I truly do look forward to the day that Pulse X and pulse chain ultimately get here. We’re able to use them and everything else so price predictions for bitcoin and ethereum. I think that we’re going to get to 28 000 and 2000. Then I do think that we could see some sort of pullback.

I do think that we could get one push higher because what’s going to happen is a lot of shorts are going to come in around 28 000 and 2000. So, I do think that they could get absolutely smashed if there’s a short squeeze at those numbers. I would not be surprised, if we saw ethereum run to like 2500 to liquidate all the shorts. Before, eventually, going and crashing all the way back down where I don’t know where it would go from a low. But, I do think that bitcoin too could go to like 30-32 000 somewhere around those numbers and then end up crashing within the next couple of weeks because I do think that we are on a pretty insane little mini bull run here. I do think that profits will be taken, so don’t forget to do that. If you are somebody who’s looking to get in and out of a lot of these coins. Now what are my price predictions for some of the other ones that I talked about truthfully? I think that Cardano could run up to about 70 to 80 cents somewhere around there. Maybe even closer to a dollar. If we get that short squeeze kind of scenario we also have Solana. I think Solana could run all the way as high as like 50 to 60 dollars potentially. You even have other altcoins like the lower ones like mina protocol right now, hitting right around a dollar.