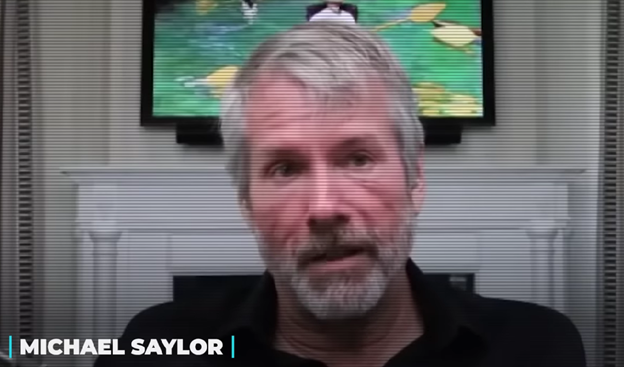 ‘2/3 of the people in the crypto industry for the last decade don’t understand what I’m saying. There are people that have been in the crypto industry for a decade that have master’s degrees in computer science, and they think that they’re very informed. They don’t even understand what I’m saying. And they’ve got such a strong bias toward their point of view that they’re unwilling to accept a new idea and even stop and think about it for a bit.’ – Michael Saylor.

Bitcoin bull Michael Saylor has been one of the biggest supporters of Bitcoin since 2020. His financial positions and philosophical beliefs on bitcoin have been well documented and many crypto analysts and enthusiasts, even our own commenters, believe his convictions are narrow-minded as many other investors, businesses, and organizations have embraced other coins with utility.

Just a few days ago, the Walt Disney Company announced that six companies would be joining its 2022 Disney accelerator to build augmented reality non-fungible tokens and artificial intelligence solutions. Polygon made it to Walt Disney’s list, thus becoming the only blockchain platform to have done so ever. As a result, the MATIC polygon’s native utility and staking token have rallied more than 22.5% since the announcement. With that said, if you want to track your trading process any time, the Jet-Bot trading platform may help you with that. It has 4565 active bots. Check out top traders rating and choose best traders whose deals you would like to copy trade. Jet-Bot copy trading platform supports both spot and futures bots trading on Binance. You don’t need to transfer funds to the platform. You hold your crypto in your own personal Binance account.

The things that are closest to bitcoin right now are the bitcoin forks. So, if you look at Bitcoin Cash, it has collapsed by 99.5%. It’s now like 50 basis points of bitcoin. So I would say bitcoin cash is probably the closest thing to bitcoin that was supposed to be an improvement. Obviously not.

So you know, I think that the most important point here is that somebody invented mathematics, and we were living without it. You’ve got mathematics based on 10. You can design planes, trains, automobiles, electric power plants, radios and modern technology. You can fly the moon with mathematics. Now are you going to quibble with me over whether the mass should be base 10 or base 8 or base 4? Like I said, Newton wrote Principia Mathematica. It was pretty much all the math that 99.99% of the population will ever need or know in their lives. It was done correctly 200 years ago, and it’s pretty good. If entrepreneurs keep launching base 8 math and base 16 math and base 4 math and base 32 math and all these other things, we don’t want Arabic numerals anymore; we want Roman numerals or even Cypriot warrior numerals.

At some point, all of the tinkering trying to reinvent the wheel is dysfunctional. I think most of the people in the crypto trading industry keep trying to reinvent the wheel because there’s some measure of ignorance, arrogance, and greed. They kind of want to get rich, but if you’re greedy, a better way to get rich is to build an application on top of Bitcoin using the token economy. It’s like all the people who want to reinvent iOS, which will never happen. It’s not going to happen. How about building an app on top of the iOs? Yeah, I mean, you’re going to have to do something new and in this case, I just think a lot of energy is wasted either worrying or coming up with all these creative possible scenarios under which bitcoin might be in trouble so that they can justify their coin. It’s like I have a quantum resistance coin, and do you know that theoretically I can imagine blah-blah-blah. It’s like this: this is just silly, ridiculous stuff.

However, it goes on and it’s an incredible waste of energy. It’s like you’re wasting your life. If it causes you to veer into the practice of issuing your own unregistered security, it takes you down a dark, unethical path too. It’s illegal, it’s unethical, and it’s also a stupid waste of time.

So, I think it’s worthwhile to consider carefully the right and defend the network. Think about the network, but for the most part, the creativity that’s going to increase the ecosystem’s economy by a factor of 100 is mostly going to take place on Layers 2, 3, 4, 5, and 6. Bitcoin is on Layer 1. It’s good enough. It’s good enough to be a hundred trillion dollar base layer. It’s good enough to be 200x bigger than it’s good enough to be a 500 trillion dollar base layer. That’s not the part that needs fixing; that’s the basis 10 math. At this point, everybody ought to be working on application, derivatives, services, and other protocols, and they ought to stop trying to reinvent the wheel. I mean, it’s just not very productive.’

What do you think of Saylor’s thoughts here? Do you agree with his belief in bitcoin not being perfect but good enough?