GT-Protocol Blog SEC Probe On Coinbase Can Change EVERYTHING 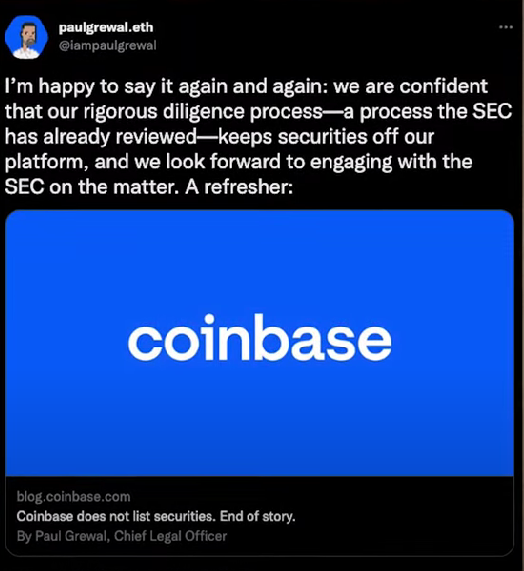 It was just weeks ago that the CEO of Coinbase, Brian Armstrong, detailed Coinbase’s strategy to transform the company’s internal procedures and a vision to compete in stature with legendary tech companies such as Tesla and Amazon.

But once again, Coinbase is finding itself in the headlines with another PR nightmare, making news for the wrong reasons this time. It appears more serious as it’s been reported that the SEC is probing the Coinbase on suspicion that it allowed U.S. persons to trade unregistered securities.

As reported by Bloomberg, the regulator was investing in some of the tokens listed on the exchange. Apparently, seven cryptocurrencies listed on Coinbase were securities in an unrelated insider trading case brought against a former product manager at the exchange.

Last week Federal prosecutors arrested a former Coinbase product manager, Ishan Wahi. Wahi, for tipping off his brother when new tokens were scheduled to be listed, which allowed them to make about $1.5 million in profit by buying lightly traded cryptocurrencies ahead of new listings.

Everyone can bet that no one want to get into trouble like this. By the way, Jet-Bot is one of the great initiatives, which allows you to follow the best traders and track all of their trades. Jet-Bot is an official broker of the Binance crypto exchange, so you don’t need to transfer funds to the platform. You hold your crypto in your own personal Binance account. The platform has been launched since 2019 and offers a 3-day trial period for new users. Jet Bot got 100% rating at CoinPayments website according to 7000+ users feedbacks. Don’t hesitate, register right now!

As an aside that predates this case, the SEC claims that Coinbase listed these nine coins as securities: AMP, Rally, DerivaDEX, XYO, Rari Governance token,  LCX, PowerLedger, DFX Finance, Chromatica.

Ultimately, the SEC is investigating whether Coinbase allowed Americans to copy trade crypto, e.i. unregistered securities. The 62-page SEC complaint went through the nine tokens one by one to illustrate how each should be defined under the Howie test as security. The SEC stated:

‘Each of the nine companies invited people to invest on the promise that they would make future efforts to improve the value of their investment.’

The market reacted negatively to the news as Coinbase’s stock dropped 21% at the time of writing. While Coinbase maintains its innocence and welcomes the SEC’s further investigation, Coinbase’s strategy and or practices have recently been called into question. Coinbase started off as a relatively conservative exchange, not offering too many coins, as other exchanges started to win market share by offering different opportunities.

During a quarterly earnings call in May 2021, Armstrong mentioned Dogecoin, the joke cryptocurrency that Elon Musk adores and that has been promoted by memestock investors since its inclusion in Coinbase’s coin offerings. Dogecoin has lost 90% of its value in the last year, and the company plans to issue more than 100 new tokens.

Armstrong stated that Coinbase would accelerate asset addition because we’re quickly going to live in a world where there’s so many that we’re not going to be able to keep up. The fee-driven model might be one of the main reasons for the aggressive expansion of coins regardless of the outcome.

Of course, Coinbase is not 100% responsible for what users do and don’t do with their own money in coins. Adding dubious coins, on the other hand, appeared to be about collecting large fees rather than protecting the investor, which may now come back to haunt the exchange.

What does this case mean for the crypto market moving forward? Wahi’s insider trader case becomes a major problem for Coinbase because at the center of insider crypto trading fraud there must be a security. The coins in question appear to be raising money for the company to operate according to the SEC.

For power, the Australian company that issued the power currency. The funds raised through the token sales were going to enable the company to meet its developmental milestones, according to the SEC. By pointing this out, the regulators are suggesting that these digital assets are actually securities like shares and publicly traded companies, which would put crypto investors squarely in the world overseen by the SEC. This is a stark contrast to bitcoin, which chairman Gary Gensler has come forward and plainly classified as a commodity.

In dealing with securities, Coinbase would have to comply with all kinds of expensive regulations and submit to examinations that it currently doesn’t have to. While this investigation and a potential case can take years to unravel, if the SEC is right and all these companies that issued their own digital tokens have actually been offering unregistered securities, this would put a huge damper on the industry, which has relied on the lack of rules and vague jurisdictions to create thousands of new tokens.

Many analysts, pundits, and enthusiasts, particularly of bitcoin, have been preaching for quite some time that most of these tokens will go to zero and that there’s no need for all of them. It’s possible that this case could be the beginning of the wipeout for many.

What do you think of the SEC and Coinbase cases here? Do you think that this is the beginning of many coins going under?