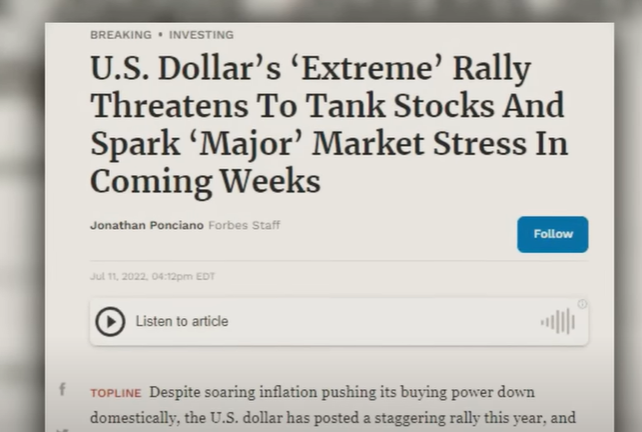 So, 1974. We went from everything looks to the worst recession since World War II in four months. I’m thinking it’s going to look similar because of the speed of the monetary tightening the speed of the rise of prices. So, I think we are going to have a very ugly few months both economically and for markets the question is is what comes next and that’s the key point. If my base case comes into play which is the fed pivot. They stop raising rates jpeg they already started suggesting. Maybe we’ll pause in September. My guess is June will be the last hike and after that they will say.

We’re just going to see and we’ll see the economy start going down the toilet. They will start thinking well we’re not going to do QT now either. So, they’re not going to start shrinking the fed balance sheet and before it we’re going to be talking about rate cuts. But, we don’t have many rates to cut rates in nowhere. So, the only outcome is they’re going to have to print money the credit market’s already starting to dry up. That’s usually an indicator the housing market’s rolling over and that’s a bad indicator printing money is this stuff here you have a silver coin. You have a copper coin made silver right. Basically, it’s called debasing the currency which the romans and Chinese already did yeah because don’t forget the basement currency works in a simple way. If you’re really thirsty and I have a bottle of water you’ll pay anything for it.

if you’re really thirsty and I’ve got five bottles of water you’re kind of thinking yeah I probably need some of that water. I’ll buy them all but at a lower price if I say here’s a million bottles of water you don’t want any of it because there’s too much water now it has no scarcity so if you make too much of something it becomes less valuable. So, if Da Vinci created 50 million pieces of art guess what they’re worthless. So, it’s that concept and what it does is if something gets devalued versus something else so we’re not making more shares in the S P actually what we’re doing is buying them back making less of them therefore the s p goes up real estate. There’s periods where we try and create new real estate but generally real estate prices go up versus the fed balance sheet because it’s a relatively scarce asset same with gold same with crypto. Because this balance sheet magic optically changes markets and if markets go up then household net worth stabilizes and spending comes back companies stop laying people off. So, it’s actually a bit of a magic trick.

It’s a trick right it comes down that all saying the oh the ball goes up the stairs the bear goes out the window but the bear is about to go out the window. The question is when does a bull start climbing again right is it kind of changing. We either go through a scenario like 2000 which was a typical old school recession where equity markets unwound excesses the bear market was 18 months or so. Then the fed keep cutting rates and, eventually, it stabilizes. But, if we look at 2008 which was the next recession as soon as the fed used the fed balance sheet we pretty much stopped in its tracks happened really quite quick after they did that they cut rates first didn’t really help because the banks was had seized up then they used the balance sheet then they did it again in 2010 12 16 and then 18 was the fed pivot the Powell pivot where they went from hiking to “we need to cut well”. Trump yelled at the guy.

He says you cut this out you’re killing my economy but he was raising rates because trump had cut taxes. They had driven given this boom and then inflation. So, inflation had gone up yeah the power like well I need to do this. But, the economy cannot take higher rates because everybody’s so in debt and everybody’s so old that is that so let me so here we are at 2022 right we have app we have employers not going back to work. So, all these Reits real estate investment trusts. They own all these office buildings and then never has the fed have had. I think there’s a 30 trillion dollars debt now with 200 trillion off balance sheet and they keep cutting rates and all this my question to you is this reason. I want to ask you will this and then and your thing is about paying people universal basic income just so they can survive which I can now see your side of it but it violates every bone in my body. But, the question is can they keep doing the same thing given the condition.

So, this is going to take us back to the 1940s in a SEC. But, an answer to your question is what choice do you give people. You’re going to get destroyed because of the supply chain issues because of cloven all of this and your wages won’t keep up. So, we’re going to destroy household net worth and everything’s levered so all the borrowings against houses and all the borrowings against equities and all of the borrowings on top of borrowings. You’re going to let the collateral go down and blow the entire thing up but isn’t. What they’re doing when they say they’re going to pay off the student loan debt because if there’s debt there’s also that’s dead forgiveness that’s MMT right which is coming whether we like it or not again. I understand.

So, what you’re trying to do here. What they’re trying to do is reduce the debt via financial repression which is you basically have inflation running slightly higher so you have than interest rates so what you want is to reduce the real value of the debt. So, if you think back to your parents how much they paid for a house and the mortgage. They had the mortgage seems laughable. It’s because over time inflation raised the value of the house and the debt doesn’t get raised. So, in the end, the debt is nothing, so the way that this stuff here makes the money less valuable correct it makes the debt less valuable right, so it’s okay.

But, if you’re lending money it becomes complicated, but, anyway, the point being is you either have a fiscal stimulus which is let’s say the republican view. We’ll have a fiscal sibling cut taxes or and we’ll put some spending and what happens is that doesn’t go to the people who are the worst off. So, it’s creating this issue of 1 versus 99 which everybody can see. Nobody knows how to solve the issue is actually the balance sheet because all of the expensive assets keep going up because they keep printing money the roads get richer the rich get richer. But, doing this blanket fiscal stimulus is hard because the rich get richer again so I think people have thought well maybe we should just try and give it directly to the people who are most affected okay fine those are the two choices or you do nothing which is too late because there’s too much debt so you can’t let the system clear anymore the old way would have been you let the system clear. It’s all okay. You just have a recession everyone stops borrowing as much money. The world is 400 of GDP in debt the world has never been this in debt in all economic history, well I hate to say this. I’m seeing your point of view and what I’m saying is regardless of your philosophy.

It’s difficult to find other outcomes that kind of make some sense so let’s go back to the 1940s now and figure out how bad. It was then this was a very similar setup. The worst supply chain issues massive inflation everybody coming back in. But, what happened was the economy collapsed then interest rates came down and they stabilized. They stabilized because the fed stabilized them inflation was running slightly hot three percent. Bond yields are about two percent so real rates mean you in the property market are going to make a lot of money. So, negative real rates become very good for assets and what happened in the 1940s and 50s was a massive economic boom what we actually got was the value of the war debt eroding because of this financial repression. We had the value of assets like housing the equity market went up 900 percent over that period of time there was a lot of fiscal stimulus because you had to rebuild after the war. Companies were building factories so if you think of it now companies are going to be rebuilding factories in the United States or in Europe and not in China. So, that’s going to get some stimulus. The jobs are not there it’s robots in the factories. But, it’s still a stimulus for the economy. The government will do some stimulus as we’ve talked about when interest rates will remain relatively low. Low inflation will remain controllable.