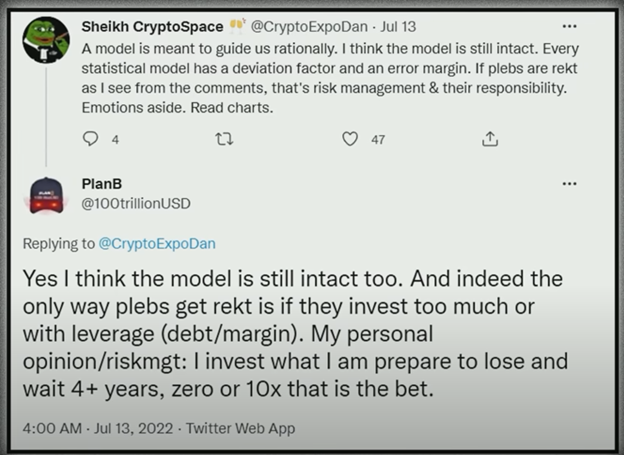 Bitcoin, the world’s largest cryptocurrency, has once again slipped below $20,000. At over %19,700, the cryptocurrency has lost more than 8% of its value over the last five days. Last week, bitcoin climbed above $21,000 for the first time since June 26.

However, due to expectations of June’s inflation figures, the markets slipped again as investors seemed to be expecting the very worst. The US consumer price index for June 2022 was 9.1%, up from 8.6% in May, according to data from the US Bureau of Labor Statistics. Despite the high inflation rate, it outperformed the 8.8% forecast. Bitcoin investors and key market experts are still convinced of the asset’s qualities as a hedge against inflation, and they may very well be right. Since the announcement of the hot inflation figures, Bitcoin seems to be on the recovery path.

As of press time, the crypto trading asset had risen by more than 2% today alone, recouping some of the losses from the previous week. Prior to the announcement, the weekly loss was over 11%. Now it’s down to 8%. Bitcoin also hit an intraday high of just over $20,000.

However, the crypto market sometimes is too complicated to understand. The one of the useful platform is Jet-Bot, a Binance trading bot exchange. You don’t need to deposit fund to the platform and can connect your Binance account via API keys. Register now, and don’t worry about crypto.

Let’s begin with Michael Saylor’s tweets. An ardent supporter of bitcoin and an American entrepreneur and businessman, he is the CEO and co-founder of business intelligence and analytics firm Microstrategy. In his interviews, Saylor often examines bitcoin from the macro side, noting the charts and technical analysis but the need for such a rare asset in the current macro environment and global economic decline. In fact, that is why Microstrategy adopted the bitcoin copy trading strategy in 2020 rather than sit on a pile of worthless cash. Here is Sailor’s response to the newly released inflation figures:

This is the unfortunate state of the global economy. The US dollar is facing annual inflation of 9.1%, but many other major fiat currencies are weakening against it compared to a year ago, while the Australian dollar has gained 10%, 16% on the pound sterling, 17% on the euro, 24% on the Japanese yen, and over 100% on the Turkish lira.

For the first time in 20 years, the euro slipped below the US dollar. On Wednesday, a single euro was bought at $0.998 on the foreign exchange market at 12:45 GMT, down by 0.4% in the day’s trading. If investors are running at a loss with a dollar, euro, or pound sterling in yen, then it’s anyone’s guess what is happening with other less popular fiat currencies.

In a series of tweets, the anonymous bitcoin analyst and former institutional investor Plan B urged his nearly 2 million Twitter followers to wait for a bounce while stacking SATs. An independent analyst discusses some crucial indicators with his followers. Here is one of his tweets:

Another tweet, under the pseudonym analyst, discusses his famous stock to flow model as follows:

His plan B accompanies his tweet with this chart of bitcoin’s price and stock to flow prediction over time. The chart shows there have been lapses much like what you find with every other valuation model. It shows times when the stock price went higher than the asset’s actual price and times when it went lower. The model’s price prediction is much higher than bitcoin’s current price, but so is every other valuation model and indicator. The 200-week moving average is still above $22,000 and the realized price is above $23,000. Yet bitcoin’s actual price is below $20,000.

In reply to a comment on his original tweet, Plan B also defends the model and gives a small piece of investment advice.

Plan B’s piece of advice is the same thing many other market experts have stated; don’t invest too much; invest only what you think you can part with and be patient. Five-month and two-year holders may be running at a loss now, but that won’t matter once the market fully recovers and we hit another all-time high.