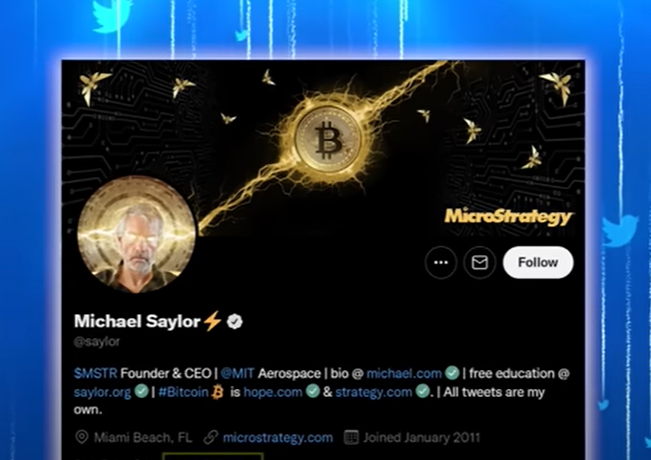 Michael Saylor steps down as CEO of MicroStrategy. Senators on both sides of the aisle seek to permit the CFTC to regulate crypto. And despite the insolvencies, hacks and uncertainties, what’s the best thing you can do to protect your crypto? We’ll talk about it.

Let’s get it! I’ve said before Bitcoin is hope, and Bitcoin is the strategy that we use in order to outperform during a very difficult financial period when most currencies are crashing and most assets are struggling, and I would recommend it to anyone that’s looking at a good treasury strategy. It’s been no secret that MicroStrategy is playing the macro long game. They’re taking a long-term approach with Bitcoin. And so far, they’ve spent almost $4 billion on that approach. Unfortunately, this year, Bitcoin is down over 70% from its all-time high. And everyone on board has felt the pain during this time of quantitative tightening. MicroStrategy included.

After they reported a net quarterly loss of almost a billion dollars, Michael Saylor has stepped down from the CEO position. He’s becoming an executive chairman instead. Considering Vitalik Buterin dunked on him just a few days ago, it has to sting just a little bit, but the transition is probably for the best. Now that Phong Le has now inherited the seat at the head of the table and will run the day-to-day operations, Saylor can now do what he does best. Focus on buying more Bitcoin. The way I see it, this isn’t really a loss for MicroStrategy.

Now, Saylor has the time to double down on his approach, scoop up more Bitcoin and spread the word to his 2.6 million Twitter followers. Let’s see how this transition plays out on the charts. Speaking of charts, let’s hand it over to Frankie Candles for a market watch. Thanks, Ben! Alright, guys. Let’s jump in and do a little market watch here. We’ve got Bitcoin coming in at $22,837. Down just a little bit on the day Ethereum coming in at $1,616 Down about 1.5% on the day Now, I want to bring you guys over to the charts really quick. Now, if you guys keep up with this channel, you will know that we have been feeling a little bit bearish on Bitcoin having our confirmed bearish divergence on the daily timeframe. This is typically very bearish.

And I just want to let you guys take a look here on regular candles. We are starting to print a blood diamond on the 4-hour. But not only that. It’s also on the 3-hour. And this is on Bitcoin and Ethereum. Now, these blood diamonds usually are the start of pretty decent downtrends. This last one gave us a nice 8.5% move down. And these are typically pretty reliable signals. So this is a pretty bearish look for Bitcoin in the short term. So keep an eye on these bearish signals, guys. Again, we also have money flow coming out on the lower timeframes also indicating that we could have a move to the downside coming.

We’re not the only ones tired of Gary Gensler and the SEC regulating by enforcement. Recently, longtime Democratic Senator Debbie Stabenow and Republican Senator John Boozman have proposed a bill that would give the CFTC regulatory control over spot markets for digital assets such as Bitcoin and Ethereum. If this bill passes, that will be a blessing for crypto, and the results will be astoundingly bullish.

It will be great for these assets not to fall under the corrupt regime of the SEC. But it would also be great for the CFTC to get more funding, more job positions, and the increased influence will lead to more lobbyists and donations. Any chance we get to eliminate the SEC from the equation, well, it’s a win-win for retail investors. We all know the SEC does much more damage than good. CFTC Commissioner Caroline Pham told The Wall Street Journal, “The SEC is not working together with the CFTC. They go out unilaterally to try to establish precedent that’s going to dramatically reshape the landscape as to what’s a security and what’s a commodity.” I’m completely on board with the CFTC taking the reins. And Commissioner Caroline Pham is the type of politician that sees the silver lining in this industry. Instead of using fear to blindly regulate crypto, she’s taking the time to spread awareness.

She’s doing interviews talking about how important transparency is. She’s even doing tours at Uniswap and Paxos to learn about their ecosystems. Would you rather see this space be a string on Gensler’s marionette or in the hands of someone who cares about the space and what it’s capable of? What a novel idea! While the senators and regulators battle over who gets to control what, because of the current global economic climate, companies are going insolvent, other companies aren’t going by the playbook, and hackers are exploiting everything they can while they still can. I bring this up because despite how hectic this space can be, you can take precautions and insulate yourself from the risks of this space while you still benefit from its rewards.

Look at what’s going on out there. Well, we’ve seen what’s happened with Celsius, Vauld, Voyager and Three Arrows Capital. Those insolvencies were just the first few dominoes. The insider trading at Coinbase was a catalyst for an SEC investigation. And now, Amp has been removed from trading on Binance.US since it was deemed a possible security. Robinhood just got fined $30 million for violating anti-money laundering legislation. And if you keep your crypto in Robinhood, you’re not doing yourself any favors. It’s a big no-no. Besides all them, 7,800 wallets in the Solana ecosystem were hacked from the supply chain exploit from Phantom, Slope and TrustWallet. These are hot wallets.

Now, as bad as that hack was, it doesn’t even compare to the $190 million that was just stolen from the Nomad bridge. I’m not trying to be a Debbie Downer, but my point here is, if you keep your crypto on a Ledger cold wallet, none of these things affect you. You have to prioritize security with a Ledger cold wallet. You’re not connected to a server, and you’re insulated from these types of issues.