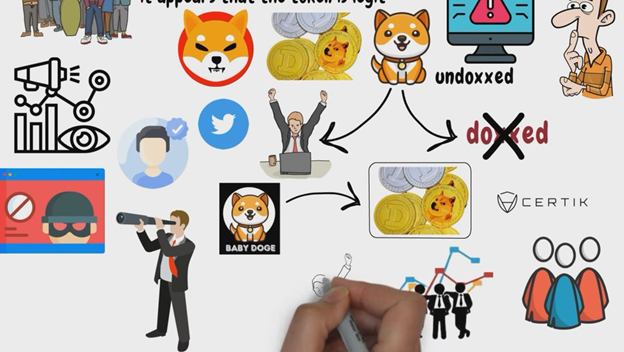 Is Baby Dogecoin a Scam? Obviously, Doge has become big and its early investors have become big as well. As a result, it’s no great surprise that there are some similar crypto tokens with similar names all over the world, but can we blame them? The DOGE’s sudden and brief limelight was enough to bring in millions of new crypto traders, similar to how Bitcoin did years earlier. In light of that, it’s easy to mark this year as a successful one since it’s given us a wide range of new crypto tokens, which is a good thing for the community.

However, all is not sunshine and rainbows because some defectors have also joined the crypto bandwagon with the sole purpose of pumping and dumping, leaving you empty-handed. We in the crypto community despise these kinds of acts, so let’s unveil the truth one crypto at a time.

But anyone can become wealthy if they try every other possible opportunity. Jet-Bot is one of them. The platform is the Binance exchange’s official broker. You do not need to fund the platform and can connect your Binance account using API keys. Register now and try to become the best crypto trader in the world.

Today we will unearth whether the Baby Dogecoin is a scam or not. Anyway, without further ado, let’s get right to the point. First of all, you may be confused as to why we are discussing the Baby Dogecoin. Several of you requested we talk about this one. Since then, a lot of allegations have surfaced about Baby Dogecoin. So we thought it might be neat to find out about this alongside our usual review, so here we are. Even if you already own Baby Dogecoins or are thinking of buying them, I still recommend reading this article as it might be able to provide you with a better insight into this whole situation and maybe lead to you cutting your losses and selling them.

To begin, let’s talk about its website. Baby Dogecoin’s website is professionally put together. It’s not the most amazing website on the Internet, but it carries a professional touch, something many similar websites lack. When talking about security, the website is SSL secure and optimized for different viewports.

Overall, the website does not emit pump and dump energy, therefore it is safe from that standpoint, but what does its website say about its token? According to the about section, Baby Dogecoin has learned a few tricks and lessons from his meme father, Doge, a new crypto born by fans of the Dogecoin community online. Baby Doge seeks to impress his father by showing his new improved transaction speeds and adorableness.

Basically, they are accepting that it is a DOGE clone and after further reading it says he’s hyper deflationary with a static reflection that rewards holders, so more Baby Dogecoin are being automatically added to your wallet each transaction. Simply love pet and hold as five percent of each transaction is automatically redistributed to Baby Doge holders. Well, you would probably know that the inspiration for Baby Dogecoin came from Dogecoin, the father of all meme currencies, but Baby Dogecoin tries to stand out by making itself a hyper deflationary and reflection token.

What exactly do these terms mean, and is this standard public relations jargon? To completely understand the above quote, we must first grasp these two words. In short, hyperinflationary tokens make the total circulating supply of tokens continue to decrease until it reaches a predetermined level, stopping the market from being swamped with too many tokens as token creators produce, mine, or sell additional tokens. In this way, the token’s value will increase over time.

By contrast, reflection rewards token holders by taxing transactions and redistributing a percentage of the tax charge to token holders. This is generally regarded as a reward or encouragement to hold tokens. Now if you browse down the website, you can sense the developer’s enthusiasm when they inform you that the token has been Certik audited.

In case you didn’t know, offers the token a lot of credibility and has grown to be one of the most sought after badges in the meme currency market. Furthermore, it is stated that Baby Dosh claims to have burned +40% of the tokens, which means out of the 5% of the redistribution, 37% will be distributed to the dead wallet, and the coins are burned with every transaction.

In other words, it seems that they are purposefully pointing this out to adversaries who claim that they are frauds. As for that, I have no idea, but the marketing for Baby Doge seems very dodgy even if the token may not be.

Furthermore, we learn in the website’s latter section that Baby Doge is planning to release a native application for iOS and Android, as they claim to have burned 40% of the token. The app will allow users to purchase cryptocurrency. Cryptocurrencies will be able to be sent between users. The app’s users will be able to swap cryptocurrency for fiat currencies. Users will also have access to text-bit technology, which allows them to send SMS messages to anyone in the world using a phone number. I guess if Baby Doge succeeds in this regard, it will set the token apart and encourage mass adoption, but that’s just my speculative opinion.

Now if we go deeper into this rabbit hole, we will stumble upon Baby Doge’s white paper, which is okay-ish in design but provides little information in the 14-page downloadable pdf. The White Paper begins with an introduction in which we find out that the Baby Dogecoin was launched in June 2021 and is gradually becoming one of the most popular meme coins in the cryptoverse. We all have doubts about that, but still, as they say, Baby Doge is on a mission to bring crypto to the average person while also helping save dogs in need. It does, after all, draw influence from previous meme tokens.

That’s all well and good, but Baby Doge needs to produce some real data if it wants to prove its credibility. It demonstrates this by charging a 10% fee on each transaction, which is divided in half. The idea is that, as a reward for holding the token, 5% will be allocated to all existing holders and the remaining 5% is split 50/50 with half of the Baby Doge tokens sold via the contract into BNB. The other half is automatically paired with the previously mentioned BNB and introduced on Pancake Swap as a liquidity pair.

The Baby Dogecoin has been on the road for six months and has covered a lot of ground. It claims to be partnered with coinspayment.net, and that’s true. Furthermore, the Baby Doge total supply is ridiculous at 420 quadrillions, with 295 quadrillions in circulation along with 125 quadrillions that have already been burned. Furthermore, its liquidity pool is currently estimated to be a little more than $22.5M on the pancake swap and has almost $19M provided in any swap for the OK exchange. Consequently, with 1.1 million registered users, Baby Doge has a sizable following. This indicates that over a million people believe in and possess this token.

So far, it appears that the token is legit and the only thing I can think of that might make it a scam is that the Baby Doge developers are undoxxed. Obviously, Baby Doge not being doxxed is the only thing that raises concern for someone like me who cares about such things. Apart from that, many meme token creators stay anonymous, as with the creator of SHIB, which is basically a norm in the market. Aside from that, the token has so far been shown to be impressive.

Another factor that may support its innocence is the fact that Baby Doge is one of the most popular tokens on Twitter. They have a verified handle, and they appear to have a cult following. Granted, some of these commenters may be spammers. The majority of comments, on the other hand, are upbeat about the token’s future.

Therefore, the Baby Dogecoin is a perfect meme coin, and while it received criticism due to its nature as a meme coin, the token has two successful audits, one done by Certik. Furthermore, there are a lot of Baby Dogecoin holders, and the mission of the project is very clear and simple. While this token might not be attractive to some types of investors because it is so far removed from its original project, it’s nevertheless a very promising token that most definitely will gradually gain mainstream acceptance and no Baby Dogecoin is most definitely not a scam.