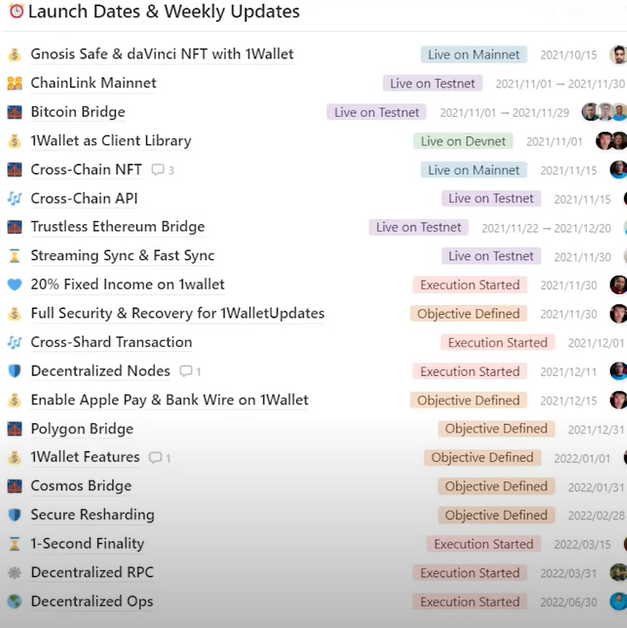 There are a lot of Ethereum competitors in cryptocurrency and it’s often said that none of them will stand a chance against ethereum 2.0. Once it goes live sometime next year, but what have I told you that there is an ethereum competitor that has already implemented many of Ethereum 2.0’s future features. This cryptocurrency exists and it is called Harmony. Today I’m going to give you a quick review of Harmony, bring you up to speed on what the project has been up to and tell you why it’s one coin that could be the one coin to rule them all.

It’s time we talked about cryptocurrency if you’ve never heard of Harmony. Before here’s what you need to know Harmony was founded in 2018 by Ranjian lan Sahil Dewan and Steven C. Harmony was built by Harmony protocol – a for-profit software company based in the United states Harmony’s development is coordinated by the Harmony foundation which is presumably a non-profit.

It’s not clear where the Harmony foundation is based Harmony raised 28 million dollars across various token sales in 2018 and 2019. The Harmony mainnet went live in June 2019 and has not seen any downtime since its launch. As I mentioned in the introduction Harmony looks like ethereum 2.0 under the hood. This is because Harmony leverages the ethereum virtual machine for smart contracts and uses a sharded proof-of-stake blockchain consisting of four shards. Each shard can process up to 500 transactions per second meaning Harmony can currently process around 2000 transactions per second with a transaction finality of 2 seconds. Each shard is secured by 250 validator nodes which are randomly assigned to ensure no single shard can be corrupted by a handful of validators with a large stake to further improve security. Harmony uses a novel proof of stake algorithm called effective proof of stake or epos. This involves reducing staking rewards for validators when their stake gets too large; validators must take a minimum of ten thousand one coins to become a node delegation. It is also possible and the minimum stake is one thousand one coins. One coin staking rewards are currently around ten percent per year for validators and nine percent for delegates. There is a one day unlocking period for any staked one misbehaving validators will see a portion of their stakes slashed and this slashing penalty applies to delegated stake as well. Apart from staking the onecoin is used for governance and to pay for transaction fees when it comes to governance. Only validators can table Harmony improvement proposals or hips and both validators.

Elegators are able to vote for a proposal to pass more than two-thirds of all. One coins being staked must vote in favor with 42 percent of one’s current supply of 10.8 billion being staked this works out to 3 billion won. When it comes to transaction fees all onecoins used to pay for transaction fees on the Harmony blockchain are burned. However. one is not deflationary this is because a fixed supply of 441 million. Onecoins are minted every year and onecoin transaction fee burns are designed. So, they only burn the one coin that would otherwise be minted. Validators and delegators are incentivized to stake onecoins when transaction traffic is low via onecoin issuance and when transaction traffic is high via transaction fees. Now you can learn more about how Harmony works and that is up there in the top right. It’s only been a few months since I last covered Harmony. But, a lot has happened since then in july Harmony founder Stephen C and experimental psychologist Jaquan Lao published a research paper which proposes using staking rewards and defy lending yields to create a decentralized universal basic income the paper centers around terra’s anchor protocol. It offers a stable interest rate of roughly 20 on Terra’s UST stablecoin by using a combination of cross chain staking and defy lending. Behind the scenes Stephen and Haquan believe that by combining this architecture with an inflation-resistant algorithmic stablecoin. It should theoretically be possible to provide something akin to a universal basic income in a decentralized manner.

If you’re interested in August, Harmony announced that chain link price feeds had integrated with the Harmony test net. A mainnet integration has yet to occur at the time of shooting. But, a tweet by Harmony from october suggests this should be happening any moment in September. Harmony announced that it had partnered with the Swap cross chain decks to bring wrapped bitcoin to Harmony shortly. Afterwards, Harmony and any swap announced the opening of a bridge directly between Harmony and polygon Ethereum’s leading layer two scaling solution. The Harmony foundation also announced that it would be allocating 300 million dollars worth of one coin towards ecosystem development with hourly rates for recipients starting at 75. This was likely a response to the phantom foundation’s own massive ecosystem fund of 370 million ftm coins which was announced in late August. Funnily enough algorand seems to have followed Harmony’s lead by announcing its own 300 million ecosystem fund. The very next day in October Harmony hosted its one world conference in Lisbon, Portugal which attracted hundreds of developers and investors. The curve finance stablecoin decks also deployed on Harmony attracting hundreds of millions of dollars in total value locked AVEis also expected to deploy on Harmony given. The community approved the deployment in October though no timeline has been provided for this. To my knowledge, the Harmony foundation has prepared over five million dollars worth of one coin as liquidity incentives for lenders and borrowers so be on the lookout for that one.

If you’re in November, the Harmony community took to the streets of NYC to see the crypto project advertised on Times Square’s iconic digital billboards. So, with all these announcements. It should come as no surprise that the onecoin hit all-time high after all-time high. However, you can clearly see its price has seen a nasty dip in recent weeks. This is for a few reasons first and foremost the rest of the crypto market wasn’t looking all that hot either bitcoin took a beating. And when that happens altcoins almost always follow suit second the Harmony foundation’s massive ecosystem fund is likely causing a significant amount of cell pressure recall. The 300 million dollars is coming from sales of the onecoin the breakdown of the allocations in this ecosystem found on the open Harmony website suggests that roughly 80 million dollars worth of one was sold in the first few weeks following its announcement. The third reason why the onecoin has been struggling is similar to the second and that’s the recent cliff in the onecoin’s vesting schedule.

As you can see this vesting cliff began earlier this month. It’s possible, if not likely that some of these vested one coins were sold further adding to the cell pressure suppressing the one coin’s price. It’s also possible that the previous vesting cliff in May contribute to one’s poor price action in the spring and summer. But, the general collapse of the crypto market probably played a bigger role. The good news is that. There is only one more vesting cliff left in November next year and the remaining 200 million dollars or so of one in the Harmony foundation’s ecosystem fund will likewise be spent over a much longer term. This means that the onecoin should have an easier time reaching new all-time highs. My long-term technical analysis suggests it could hit 50 cents later this year or early next year. You can learn all about the importance of time frames in technical analysis by watching the third installment of my technical analysis tutorials. That’s up there in the top right anyways whether the onecoin can rally higher than 50 cents ultimately depends on its roadmap. You could say that Harmony has three maps: an official community roadmap, an ecosystem roadmap and a community roadmap. Harmony’s community roadmap includes a laundry list of milestones with estimated completion dates.

Family bank transfer support and even payments now Harmony devs are hoping to have the one wallet ready with all these features by the end of the year in terms of protocol improvements. Harmony is aiming to have cross-shard transaction capabilities by December. Harmony also plans on activating its secure reshards mechanism which randomly assigns validators to different shards by February next year more about that later. Last, but not least Harmony wants to achieve one second transaction finality by March next year as far as I understand this will effectively double Harmony’s transaction speed.

In addition to these milestones, the Harmony devs note at the end of the community roadmap that their focus for the next few months is threefold onboard one million users, hire 10 000 developers and create 100 decentralized autonomous organizations or dows. Now this third focus ties into Harmony’s ecosystem roadmap. Harmony’s ecosystem roadmap is essentially explained in the aforementioned 300 million ecosystem fund breakdown on the open Harmony website. It details the seven areas where all this money will be spent. These are dows bounties partners ports launches investments and events. Harmony has some pretty big ambitions when it comes to dows and has set aside 50 million dollars in one coins to get them off the ground. This is the largest allocation in the 300 million dollar ecosystem fund with all this financial firepower. Harmony intends to fund no less than 100 dows for everything from research community building marketing market making and even creative writing content about Harmony. Each dow will have nine governors who will earn anywhere between 75 and 350 dollars per hour which is insane the caveat is that. These nine governors must keep detailed records and provide metrics to the Harmony foundation about how they’re achieving the measurable goals that make up their three mandates; bounties are pretty self-explanatory.