GT-Protocol Blog Gareth Soloway – Is the Bitcoin Bottom In? 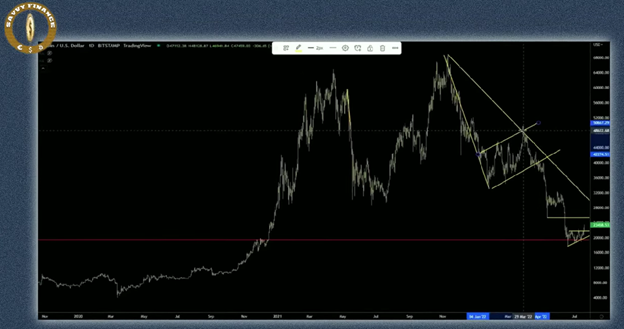 ‘The few things that bother me about the potential low being in is that we still haven’t seen enough disruption in the overall crypto market. You go to coins and they’ve all been discounted, some of them 95%, some of them 90%. Even ethereum is down significantly. Although the bounce has been just absolutely awesome on ethereum.

But to me, I look at that sector and I’m like, how can this many coins still exist and if this is the bottom and now we’re headed up. How does that work? How do we have so many coins in the system at that point? That is one of the issues for me, as is looking back and comparing it to the dot-com era. You haven’t seen the full capitulation. I mean, we did see fear when we were below the 2017 highs, but we didn’t see that all out, like, throw your hands up in the air. Crypto’s over kind of mentality, which is usually what notes the bottom.’ – Gareth Soloway.

Gareth Soloway is the President, CFO, and Chief Market Strategist of inmoneystocks.com. The veteran trader and technical analyst was one of the few who predicted that bitcoin would fall into the sub-20s this year. Since the peak in November 2021, Soloway has had some pretty gloomy short-term predictions for bitcoin and the rest of the crypto market. While other market experts and analysts predicted that bitcoin would have massive price gains this year, primarily due to the influx of institutional investors, Soloway predicted a drop to the sub-20s.

In addition, he also predicted a massive reduction in the number of cryptocurrencies and compared the situation to the dot-com bubble burst. We have seen some of these predictions become reality over the past few weeks, but a lot of uncertainties remain about the general direction of the crypto market.

Users of Jet-Bot might also predict some changes in the market, since they copy trade crypto using. binance trading bots. Crypto copy trading allows you to follow the Top-Trader deals and earn profits 24/7 without any efforts or issues for you. The average monthly profit is +21%/month, so it assists you in generating cash in this industry. You may put your crypto here and earn up to 2000 percent annual percentage yield (APY). Every Jet-Bot account includes a free $100,000 virtual portfolio, so but bear in mind that we now have access to virtually all of the world’s opportunities.

Most importantly, investors have one simple question: is the bottom in, or can we expect more pain going forward? In a recent interview, Soloway gave an important update on his outlook for bitcoin and the crypto market as a whole. Without further ado, we will now take you to Gareth Soloway’s latest important bitcoin update:

‘Then my other issue would be that even though I do think the Fed, like you said, is going to essentially stop hiking by later this year and probably even start easing in 2023. The question is why are they doing that, and my guess is you’re starting to see a really destructive event going on in the economy right now. If you see the Nasdaq starting to really collapse down, I don’t think the Nasdaq’s bottomed by any stretch. I think it has to go down 40-50% at the very least, and then we’ll see a pivot in bitcoin where it starts to strengthen when the Nasdaq and stocks actually go down, which I agree with; I just don’t know if this is the time frame where that happens.

So I think that, you know, it’s definitely a possibility. If there’s one thing you know, just like in Game of Thrones, if there’s one thing I know, I know nothing. Kind of like you know nothing, John Snow, right. You have to respect the charts because they’re the ones that are always right and you just don’t know, but for me, I’d be amazingly surprised if all of a sudden it’s the new bull run and here we go to the upside.

Now, I will show this. I do have a level that I’m watching. If we take out this level and confirm it, then I would tend to agree with you on that right. So, if you connect the high from $69,000 to this high, you’ll notice that this line is currently around $30,000. It will slope down right into this $28K area, probably in about a month or so. If we somehow get above that, then that is a breakout on the charts that would get my attention. I think that would be the one case where I would say, okay now I actually kind of do believe that the bottom is in and now we could go back to $69k, $70k, $80k, $100k on bitcoin, but until then we’re still in a pretty steep downtrend.

The last thing I’ll just mention is that I still have a measured move where you take this high to this low right and then you have this consolidation pattern right. We have this kind of sideways channel and then if you take that same distance from here and you extend it out, you actually get right around $12,000. This line is the same as this line, and that gives me that kind of bottom area.

Again, anything can happen and that’s the beauty of investing and why it’s so freaking fun, of course. But for me, I’ll take that opposing bet. I still think we’re going to $12,000-13,000. Unfortunately, I even think there’s a chance we could go lower, but let’s take one step at a time.

One of the reasons why I was starting to talk up… Everyone knows I called for $20,000. We were at $69,000. One of the reasons was that there were chart signals, but there was also just so much crazy bullishness that it was almost the easy way to go, which was just say okay well. If everyone’s bullish, then it’s not going to go that way.

So the question is, as we rally, like when we see $26,000 or $28,000, like you’re saying, which I think we do see, do we then see everyone start to say the bottoms in, which case the contrarian view would be back to the down course?’

As of press time, the world’s largest cryptocurrency is exchanging hands at $22,572. The weekly decline has been reduced from over thirteen percent to 6.45%.

In his interview, Soloway also talks about the possible reduction in the over 20 000 cryptocurrencies in the market. He explains that it is crucial for investors who put money into certain doomed projects to get wrecked. It is only when that happens that we can embark on a permanent recovery and massive price gains.

‘You need to still have people that are willing to take the risk by putting money in those. I believe that money must be wiped out; maybe the top 50 survive. Maybe you know, who knows. There will be new ones that have great use cases that come out just like new companies come out all the time.

I want to see that period where anyone speculating on the thousand and one cryptocurrency by market cap that needs to be wiped out. That can’t be in the system anymore unless there’s a real use case for it. People will argue that’s right, this one’s about cats or this one’s about dogs. For me, we’re in the real world here where you actually need to have some sort of use case that’s legitimate.’

So, as Gareth Soloway explained in his interview, we’re at a tipping point and the market could go either way. However, it might be a little too optimistic to expect any serious price gains, especially above $30,000, within the next few weeks.

We also believe the market has a little bit more shedding to do, plus there is still the issue of inflation, interest rate hikes, and the general global economic downturn. It might also be too pessimistic to expect a dip to the $10,000-8,000 lows that we’ve not seen since the peak of the pandemic in 2020. We’ve come a long way since then. The players are different, and the general crypto market has grown stronger.