GT-Protocol Blog Every Time We Get This Bitcoin Death Cross, This Happens… 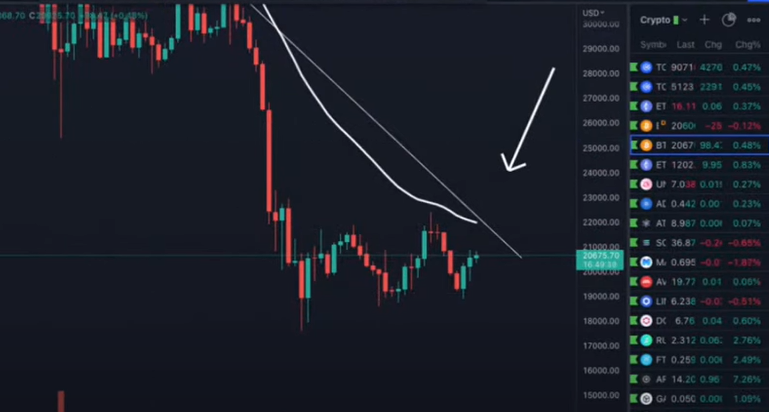 So, today the bitcoin price is twenty thousand six hundred dollars. As you can see we have the looming death cross which we have only had a couple of iteratio. Today I plan on showing you exactly what this cross means and if it is actually a bullish or a bearish thing. Let’s get straight into it. This won’t be a very long video. Look, I’ve marked out a couple of key levels over here. The yellow is the times that we’ve had the cross to the downside and the white ones marked the cross to the upside. I’m going to bring that up in a second but first and foremost.

Let’s start with our usual moving averages and see where we are relative, so having a look over here. You can see that the bitcoin price has bounced nicely off of that 255. It is currently forming a bit of an indecision candle at least on a weekly time frame. If this candle can turn green and close to full body by the end of this week, that could mean that. The bulls have a chance of reversing this entire market. But, we won’t be too quick to call the actual reversal yet. I definitely like to wait for confirmation and previous historical data does not necessarily suggest that the future is going to be that way. Let’s get straight into it. So, what am I talking about uh essentially it is the PI cycle bottom the death cross over here which is actually historically turned out to be a very bullish indicator.

I’m sure some of you may have seen this uh doing the rounds over Twitter. I want to show you the previous cycles how that worked out so bear in mind the yellow dash vertical lines are exactly where. It signaled the cross to the downside and just for those of you who are technical out there and wish to know. It’s essentially using the 471 simple moving average with the 150 ema. So, I want to zoom in on the previous cycles to show you what this looked like and what happened. Afterward, so, if you have a look over here you can see that as the cross happened and I wanted to go and backtest to see that this is exactly the way that it did actually play out and as true as anything it is.

Let’s just remove the vertical lines over here. So, that you can actually see clearly this will probably be quicker I just want you to be able to see those exact wicks. You can see it crossed right over there and you have the wick bottom in 2015 we proceeded to rally. We actually didn’t ever come back down near those low prices again and it works both ways there is also a pie cycle top indicator. But, I don’t want to clutter it on too much. I back-tested that as well and would you believe it pretty much marked it to the top. I think there was one iteration where it didn’t work out properly marking the top but it got it within a week or two, so with that being said, that could mean that there is a potential that we have reached the bottom. Although, this time is different with regards to the macroeconomic environment and everything that’s currently going on in the world. So, that’s why I say that past results don’t necessarily represent what is going to happen in the future. But, when we combine this with other smart technical analysis skills like trend trading and looking for a series of higher highs and higher lows then it can be something quite useful here’s your next one over here and it’s very much the same thing as the 2018 December bottom. It marked that let’s turn off the drawings over there.

You can see clearly at the mark that he has your cross your cross happened right there. At the top as it crossed pretty much that was the final week. It marked the bottom of that market and going on forward to where we pretty much are right now is the next one so what does this mean that we’re gonna rally from here well what I would say is that you can mark off some key levels look. If this candle closes green and to be very very conservative. I would also mark off at least at the very least. I would mark off put on your magnet the previous week’s high. So, if we managed to clear that previous week’s high at 22 336 dollars. It really has a chance to get going over here, so we’ll see. If what this is showing on the lower time frame charts but for the time being. I will still remain very cautious because this time really = could be different maybe we have a little bit more volatility leading into next week. We could end up going lower but at the end of the day. It has been a good indication that things are completely oversold. Once these cross, they work like magnets price tends to revert straight back into them. It tends to pull up into those crosses and that’s typically the way that I use emas and other moving averages so moving on to the funding rates over here. You can see that the market is still in panic, you have negative funding rates.

But we haven’t reached those capitulation levels yet and there’s it’s not to say that that has to happen maybe. This cycle we won’t bottom with a capitulation that is also possible. If you have a sort of l-shaped recovery that would look something like this. Then there wouldn’t be a capitulation of what is an all-shaped recovery. Well, essentially, it’s where the market goes straight down and then you just go sideways for a very long time bringing me. On to the next chart over here. I said yesterday to keep an eye out on this final support bulls have to defend this level and that they did that also confirmed on the three day. We do have the Macd cross to the upside. We have we’re working on our second green histogram now. So, hopefully, this can mean a little bit of further upside potential for the bulls and they can get this thing moving. This chart also reiterates right. I showed you yesterday’s show the previous cycles when we extended away from that 200 simple moving average on a daily chart. We came back I think the first time was 74 when we tested into that and rejected. We proceeded to sell off 74 whilst the chart or the simple moving average was angled to the downside the last time that we did that so that was the 2015 one, the 2018 one. We proceeded to sell off 63 and this time now.

We have 63.47 so if using historical data with all these moving averages and Ema’s. We can definitely see that there is some possibility that we could at the very least have a mean reversion bounce. But, at the very least we need to see a proper cross of the moving averages on the four-hour chart which I’ll show you exactly what I’m looking for as well as this chart over here. I’ve mentioned this many times before this is your 34 ema on a daily chart if we manage to clear this it will be beautiful. You can see that this is starting to slowly lose its momentum to the downside and build a little bit of speed to the upside. If price breaks through this level over here it will be super key. You can see with relation to what I showed you on the weekly chart now. It’s pretty much coming in at that same level, so if price manages to get above this ema and break the downtrend and which has been governing all the lower highs right now. If that had to happen today for example would need to clear in at 22 500. If we can close a couple of daily candles over there that will be the making for a proper reversal because on a daily chart not only are you going to have a series of higher lows.