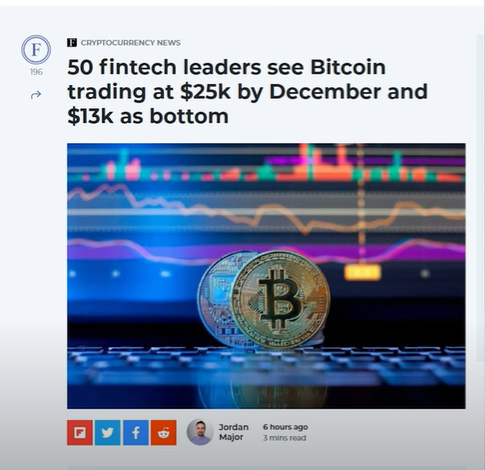 Elon Musk and Twitter are set to face off in a Delaware court. Thousands of traders get liquidated as Bitcoin dips back under $20,000. And Ripple reacts to the SEC’s latest attempts to hide the truth. My name is Ben. This is your nightly crypto news wrap-up. Let’s get it! So, this letter, this new letter which the filing just hit, Mr. Musk’s and other Musk Parties’ purported termination invalid and wrongful. That’s according to Twitter’s attorneys at Skadden, Arps. The agreement is not terminated is what they say. You suggest that this is all a leverage game, and Musk has the leverage. What makes you so sure? Well, the company right now is dealing with an issue that Musk can wait them out. He has far more resources. And he can make this case go a year, two, maybe longer, depending on how willing the Delaware courts are to hear his arguments. He can play with this, you know, game and manipulate the way he wants. Whereas Twitter, you know, the company is in limbo.

How do you run a company like this? One to three years? You know, you don’t even know exactly what’s going on with your future. You can’t roadmap. You can’t do anything. Your employees are leaving. And so I think the longer that Musk waits, the more leverage he’s going to have to get Twitter eventually go to his side and settle. Elon Musk recently filed to terminate the $44 billion deal with Twitter because they are in material breach of multiple provisions. Section 1 of the filing, Musk and his team highlighted the fact that Twitter had not disclosed accurate information on how many fake bot accounts the social media platform really has. Musk called Twitter’s bluff because even a 12-year-old could tell you that the percentage of bot accounts on Twitter is higher than 5%. Elon also claimed that Twitter did not disclose the truth about their financial conditions.

He doesn’t like that they let go two key high-ranking employees without his consent. Twitter stock has fallen over 40% from the original price they agreed on. And obviously Musk doesn’t want to pay top dollar to be the king of the bots. Ironically, Musk posted a meme on Twitter joking about the fact that they want to force him to buy the company, but now they have to disclose the real bot information in court. Twitter responded yesterday by saying Twitter has breached none of its obligations under the agreement and that Elon’s attempt to back out is invalid and wrongful. Oh, please. Unless Musk pays a $1 billion fee to terminate the bid, it looks like the two entities are set to battle it out in a Delaware court.

The case can get dragged out for some time unless Twitter comes down on the prices. Speaking of prices, let’s pass it on over to Frank for a market watch. Thanks, Ben! Alright, guys. Let’s jump in and do a little market watch here. We’ve got Bitcoin coming in at $19,320. Back below that $20K mark Ethereum coming in at $1,043 Bitcoin down about 3% on the day Ethereum down about 5% on the day Now, obviously, we’re having a little bit of a dip here, guys. Now, I just want to pull up TradingView real quick and give you guys a little bit of an idea of where I think the market is going in the short term. We do have a money flow crossover into the red on the 4-hour timeframe. This is typically very bearish. We also– to add insult to injury, we do have a 2-hour yellow X, which indicates manipulation to the downside. And these typically do play out pretty harshly. As you can see, this one did bring us down a bit. This one also brought us down quite a bit. So, this is bearish on a timeframe like the 2-hour. So, these are some things that are making me feel like we could be coming down just a little bit more as well as potentially creating this bear flag which is a bearish continuation pattern.

Typically, you see price come down, kind of consolidate up and down in this upward trending range and then break to the downside. So, there are some things for you guys to keep an eye on. I’m feeling a little more bearish with these bearish signals on Market Cipher popping up on the 2-hour.

The battle between the bulls and the bears carries on at the psychological $20,000 level. And after Bitcoin tumbled over 3% on Monday, it seems like the bears have the upper hand. Yesterday was a brutal day for traders. Data from coinglass.com shows that over 64,000 traders suffered liquidations, losing them almost $200 million. Brutal! It could get worse too, considering Finbold published an article saying that 50 industry experts predict that $13K could be the yearly low for Bitcoin this year. Despite being in a massive downtrend for the entirety of 2022, at least the number of Bitcoin addresses ever created surpassed the hallmark of 1 billion addresses. But remember, less than a million active. This bear market is vastly different than any of the previous ones before because this time, we’re clearly gaining new users. We’re moving closer to unified global regulation. That clarity will help us get closer and closer to mass adoption. Jed McCaleb, frenemy of the channel, just enemy, continues to dump the famous tacostand wallet in droves. He sold over 40 million XRP in the last seven days. He’s only got 14 million XRP in the wallet. He’s almost done. Question is, why is he selling? Does he know something we don’t? He would obviously get much more money if he waited for the price to go up. But does he think XRP is going to lose the case? Even if they lost, they would still be leading the ISO 20022 board to change the standard for cross-border payment system.

But not having the American demographic would definitely be a hit to how high their ceiling could go. In recent development in the XRP versus SEC court case, Ripple pushes back against the SEC’s attempt to silence substantiative criticism and to hide the identities of the expert witness in the case. Ripple wants the judge to know how this case has affected thousands of XRP holders. But the SEC thinks that releasing that information could inflame discourse and result in more harassment and intimidation. Sounds like they want to hide the truth so no one gets “offended.” Classic. In a letter to Judge Analisa Torres, Ripple stated that it’s antithetical and that the SEC’s attempt to suppress public criticism of its experts’ opinions is particularly egregious given that none of the SEC’s expert reports is likely to contain SEC confidential information.

What Attorney Jeremy Hogan called good outcome, Judge Torres has granted in part and denied in part the parties’ request to seal documents in connection with the amici motion to participate in the Daubert proceedings. What does that mean? Well, Jeremy Hogan cleared this up for us on Twitter by saying that the public gets to see the expert witness reports except for a small part that will be sealed because it had to do with one of the expert witnesses getting harassed. As the supreme ruler and master commander of the XRP Army, know that sometimes being patient is the best way to win a battle. Don’t rush to attack. Let the opportunity come to you.