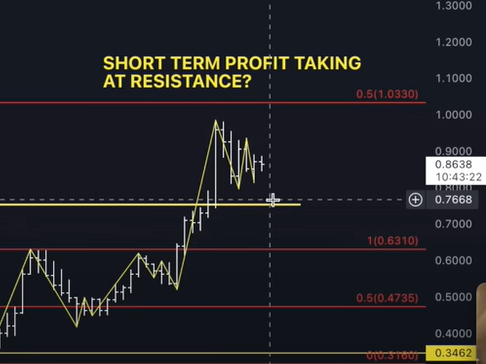 Let’s look at how these sellers have taken control of the crypto markets over the last four days and why it looks like the Bulls may just win out in the end. So, without further Ado grab that little phone of yours. So, we’ve been following this pattern specifically on bitcoin and the breakout occurred as expected and now we come back and look like we are attempting to sit and test the old resistance levels. This is like a classic pattern that happens across all markets.

What we’re talking about specifically is this level at around twenty one thousand seven hundred. This has been on the charts for over a month now. This was that first bounce out of the 21 700 level. This horizontal yellow line that’s coming across the chart and you can see the sellers have taken control here since the 20th of July you’re getting a down day another day up just to fake out to the upside of the bulls. Then, back down again, but you can see how slow and methodical this move to the downside has been now for the upside from this move that happened from the 13th where everyone got really really excited. That was seven days now from the upside to where we currently are we’re at four days. So, we’re nearly at 50 out of the time.

But, basically, fifty percent of the time now you know seven to eight days approximately getting towards that four days because we still have 11 hours to go until the day closes so we’re getting close towards that 50 in time as well. We always look at 50 in terms of price and we’re looking at 50 in terms of time now. If this happens to play out over the next 24 48 hours we continue to form a base here anywhere above that sort of 21 700. Then I dare say that I think at least in this case Bitcoin will have another attempt to the upside. It has some levels to overcome, you can see these closes that have come here on. You can see it clear on the candles at this chart on this chart here – 21-23 400.

That’s going to be one of the levels and then, of course, the Peaks so 24 300 and then our significant 50 level at twenty four thousand six hundred. So, the Bulls have a further job to do. But, at least, they’re in control now they have broken the resistance the Bears took control of in the short term, probably like the shortest term that we can see here obviously. The market has come back a little bit from those Peaks. Now we’re waiting to see whether the Bulls will take control again and push us towards. The next key resistance levels that being 24, 6. But, of course, there are some more minor levels to overcome obviously, the closers and some some highs of those daily bars but this is going to be the key level up here now. You would have seen that I had this tool on the chart just before.

So, that’s the trend-based FIB extension this is what I’m applying to the major swing here. I would call this day here a little bit of a fake out to the upside because we then got further downside. We can see that happen in real time as well where we’re looking this in those previous videos so wherever this low forms that’s where I’ll put this point C of the tool that’s a that’s B this is C. This is something that I’ll use to trade with to give me some projections of upside profit targets now. What I like with this tool, what would I like to see in the price areas, some areas coming together as clusters are the 50 levels so should the market Fall Back to about 22 which it basically has. If this happens to be the low here, that’s 21 940. This 50 level of this range lines up very very well with the other 50 level almost to the dollar so if that holds great. If it’s a little bit lower, it’s getting you can see that they’re quite close the point being here is that we end up with a price cluster at 24 600. So, that’s going to be an even more significant number for Bitcoin to overcome. That’s why I’ve got here as this being the test so this is a support Zone.

I think if it goes anything below here and starts to close below 21.7. Then we’re probably in for some more chop and grind at these lower levels. The Bears will take control and the Bulls will have to just wait a little bit longer. Then it will just go backwards and forwards for a little bit should those lows get taken out at 19k or 18 6 – it’s over for the balls for that time being. We’re looking at the upside. We hold above these levels and start to work our way towards that 50 this is going to be significant. If the market, if Bitcoin can break that 24 6 and get some closes above. Then I think we’re probably going to run towards that 100 of this range now this is a dynamic tool. It will change every day based on the price, so we could run to about that 27 400 ish level.

So, there are some pretty sizable gains to be had. If and there’s always the big. If Bitcoin can get through this target right here that 24 600 50 and could be a smaller fifty percent as well that is the key level to be broken next. I’ll be looking at this all week especially for trades and especially for cryptocurrency trades for the likes of Matic. Matic has been one of those cryptos that just hasn’t given up. So, looking for some more key levels here on Matic. All we have to do with this diagonal is move it to a horizontal. You can see where this might drop back to its always mites. If then there’re probabilities and possibilities because it’s trading. We don’t have the answers. There are no definite answers to the left of this chart. This is the left hand side look at that.

If I had the answers it’s already be filled in. But, it’s in black meaning there’s no data yet. So, we have to look at how probable it is that Matic will hold up above the old highs and start to form a similar sort of base above the old higher. So, the support and resistance flip that’s where the flip comes from is possible. That medic is going to do that at this stage yes because it is holding up above that level. Then if that is the case away we go to the upside because the balls have held support the Bears have gotten weak so basically the sellers have dried up. Then that’s where everyone flips and says this isn’t going down any further we’re about to go up so everyone tries to jump on board as quickly as possible. That’s when you say: “Well, the probabilities are now in the Bull’s favor”. Let’s find our key entry signals to get in on the momentum move and that’s how we trade to make profits right. It’s not a guessing game. It’s a probabilities game.

That’s how we continue to trade and invest small term time frames. Of course, longer term time frames so that same thing happens here with Matic what we then look at is our ranges low to high. Maybe, this is the low maybe the low comes back to the old highs around that sort of 75 level and then look to the upside. So, there’s still possibly going to be some resistance at around the dollar level. Then we look towards the 100 can that move repeat up to about a dollar sixteen dollar 22 somewhere around that level. So, there’s still going to be some reasonable gains to be had for Matic the other thing I really like about the look of Matic. Although, we’ve seen this support and resistance line you can see the market held up uh to try to break through that resistance and it actually did. This is what we’re looking at here around 75 cents which is the previous top look at what happens when we move our 50 tool to the entire range at the moment. It comes out at about 65 cents which was just above the previous High and then across to the left you can see we had a few tops up at these levels around that 65 level just before it broke down. So, 65-75 somewhere of a retracement into that level. Before we move up again is a possibility and that is for the bullish cats meaning like the market could drop into these zones. Then, start to work its way higher back to that dollar area.

So, anywhere, I think from where it’s currently loaded about 80 cents down to about 65 cents. It’s still a good bullish sign for Matic to at least attempt the upside again now. I put emphasis on those words because it’s not just a matter of the market going straight up and hitting 1.40 or two bucks. We first need to attempt the previous resistance levels that were this current top that happened a few days ago. Then, of course, the 50 level at a dollar and three so it needs to attempt that level before we can then move on.