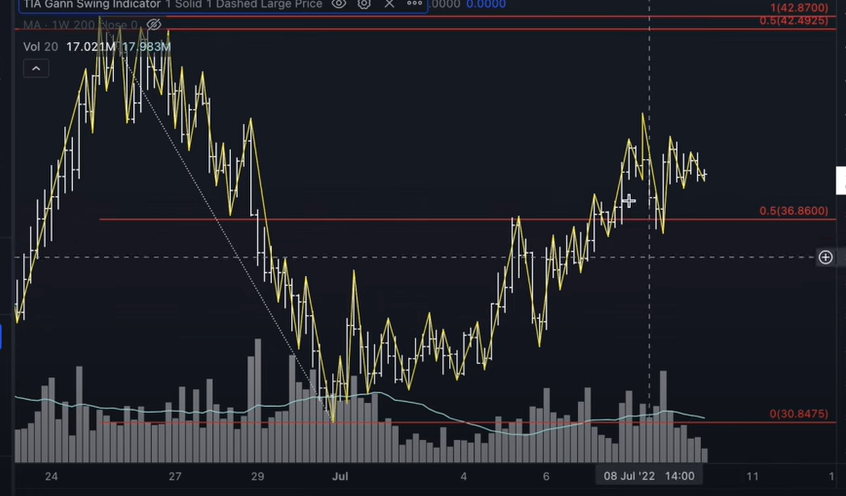 Bonus Sergatse calling in from Italy today. We’ll be here for the next couple of months. We’ve got the bitcoin update following yesterday’s video where we look specifically at the bitcoin pattern that has happened three times in this bear market and has caused crypto to crash after that point. So, we’re looking at macro and medium-term, and short-term stuff. There’s a lot to wrap your head around so stick with us.

The media and any of those channels and outlets that are giving you headlines about jargon are really noisy. That’s how to trade, that’s how to invest . I’ve been doing that for 16 years. That stuff is basically garbage. If I need to make a decision uh for any sort of trading or investing that I’m doing. But they’re good headlines it’s fun to read sometimes. Sometimes people don’t have anything else to talk about and, of course, we turn to the news headlines because they do make a good point being this is what we’re looking at yesterday. We did get rejected looking at the daily here. You can see just how close we were to getting above the 22k level that we really wanted. We got close in at 21 582. You can see how really close these markets are working towards these exact numbers here. So, this was the peak we looked at because of the swings so it’s the drop and then the first bounce out of the crash what price does that bar come to so thanks to you guys as well. Just mentioning the teaching here is the important part for me. It’s like you’ve got to learn how to do this. You can listen to Babylon but just learning how to do it is the best way to reject the close. It just amazes me how close it gets to these prices and then gets rejected so far. It’s been rejected. But, we’re still in an uptrend. The swing here our gann swing indicator is still up. We can get a higher low and wouldn’t want to see it come any lower than about 20 and a half thousand. Even though it has been rejected there’s still hope that we can move up from this point.

What I’m looking at here is the move down and why I’ve picked these levels is because it comes in at the highs of some of these bars that the market had tested before, then rejected that but more importantly. It’s one of our 50 levels 20 600 and then just to the bottom of this entire run 20 546 so remember what we looked at in yesterday’s video this big one right here. We’re looking at a retest and what we don’t want to see the weakness would be coming to the underside of the level that has been rejected already so even if that happens. There’s still one more hope that we hold up yet again and then start to push to higher prices. So, the negative or guess the bearish scenario is if we fall in support is it comes in at 20 and a half. We get rejected at 21 7 and then we break through those levels that’s obviously the bearish side. That is a little bit of an early warning sign that this is much weaker if that happens than waiting for these next lows to get taken out.

So, we definitely want to see bitcoin remain between 20 and a half and 20-21 700 until we can break through and take on 22. Again we don’t want to see it break down from twenty thousand five hundred and the worst case scenario is if it does then that’s basically our last final saving grace eighteen thousand six hundred and the best case would be where the bars opened and closed and that’s roughly 19 200 dollars. That’s what we’re looking for here at the moment the bulls are still holding their ground. Even though they’ve just been rejected. Again if you’re coming in and you haven’t seen that video definitely go and watch it to learn what it is we’re looking at here and what happened over the last three occasions in this bear market that caused bitcoin. Cryptocurrencies to dump and the last time this happened we dumped from that high to that low 44.6 percent, so we got the bounce the market could not regain the first bouncers price.

That’s right here rejection underside rejection. We don’t want to see that that’s what could potentially come up next so let’s get rid of a few of these things. You can see what’s going on here 22 is our key level. You can see that this pattern could potentially play out again, so we’re going to cover that hopefully in the next few days. Remember we were covering the time frames as well. It was approximately 17ish days give or take. Of course, there’s no exact meaning here but we just need to read what’s happening next that close underneath so far not the greatest the last time it happened. You can see back here as well this had a little bit more of a push to the bullish side failed and then rejected. If you want to do something more extreme in the titles just to trigger those last few people who are just enjoying the clickbait titles 47.4 percent was the last crash from that point. Let’s see if we can find an even bigger crash just to give the title something more uh to this low is only 36. I’m going to stick it with about 44 crash okay so the last few times they’ve definitely had a significant crash all right, So, if we’re measuring from that level where this 46 we have 30 36 to about 47 percent crash come in so from the peak we didn’t measure it was the lower top that we measured from but let’s use the peak 44 percent down. I’m going to need to do this 44 down is going to bring us in at approximately twelve thousand dollars now. If it was only a thirty six percent drop that’s going to bring us out to about thirteen thousand eight hundred now measuring it from the rejection level because like we saw in the previous attempts. It got rejected and then fell and measured it from those tops.

You can see that we got rejected and look I’ll use one of these highs to the low that’s approximately 46, so it’s basically from that resistance line and so if we did get that 36 from that current resistance line level that brings us out at 13 800 which is also a great number because if you are around in 2019, you’ll remember exactly what that number is about. That was the previous high before the market went sideways remember it was about 15 or so months that was that extreme peak that we had so if the market was to come down to that point that’s a pretty beautiful balance within bitcoin know people are going to get very scared it’s gone from 21.5 to 13 and a half-ish level. I’m not saying it’s going to get there this on the internet is not saying it has to do that. But, you can see the similarities and the symmetry in those prices. If we were to get rejected at these particular areas you can see it marked on the chart here one two three. If this happened to be the fourth time if we happen to get a very similar crash 36 to 46ish percent. It comes out at those nice sweet levels that did, of course, take time. I’m not saying it’s going to happen tomorrow or next week this does take some time and over that period it could take several weeks maybe even a couple of months.

What happens if it doesn’t happen and we go on this crypto bull run that everyone’s talking about we get this little bit of an old coin pump well to the upside definitely going to hold 20 and a half. We’re looking forward to that at the moment, pushing to the upside 24 and a half is my next major level. Of course, there are going to be some resistance levels on the way this market has been crushed. The buyers are not in a good state even if they are winning slowly. We can see that on the chart, they are starting to climb their way out of it. The seller’s you have to give it to the sellers. Especially, in a macro sense because the trend in a macro sense comes from the weekly to the monthly the trend is still down. Seeing those massive swings the trend is still down. You’ve got to give the macro to the bears at the moment until they can swing this thing back around, probably get above 34 and a half and then put in a higher lowб so for now the macro is still bearish but at least in the short term. We are still hoping for the upside to then give us a little bit of a push to the upside for the alts and speaking of voltsб just using Solana this is kind of going across the board for a lot of alts but just using Solano as the proxy here. I’m on the four hours this was the 50 level that we were watching just in the last couple of videos. The market has broken through and you can see again how beautifully the gan analysis works 50-36-86 calls of 37 for a round number. There was a rejection fallback tempted to fall back. We ran up to 40 even got rejected, came back and sat on the 50 now, of course, it did overshoot it just a little bit that’s. This is what happens in markets to give you some rough ideas. But, it did hold up just higher than the previous low and the closes for the four-hour bars were above that resistance level.