GT-Protocol Blog Can this NEW Bitcoin “Crash” get any worse for crypto? 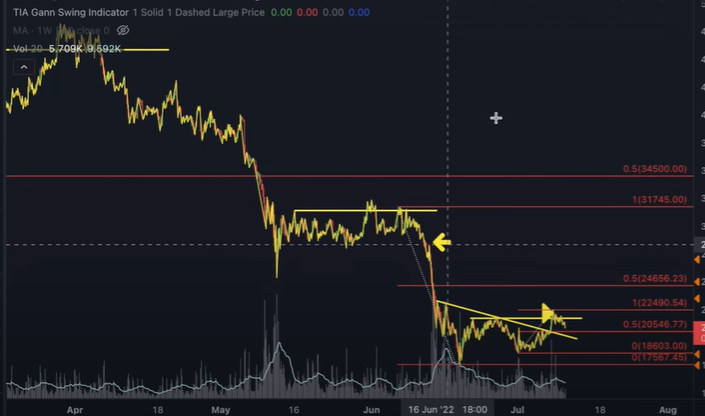 I was hoping bitcoin wasn’t going to play out like the last three times we had seen this pattern that followed with a 40 to 60 crash only a few days in. There is still hope left in this move that hopefully, the move will actually fail. We don’t get that downside crash at least for the short term so we can get some profitable long trades on cryptos and of course bitcoin as well. But if the pattern plays out and it does crash then we’re set up in both positions long and short. We’re reading the market to be able to set our positions for trades. Even if we’re not setting up for trades. At least, we understand what’s going on as we would with any sort of real-time news. This is what I see the chance to chart are real time news.

Let’s look at that and some of the news headlines which are the big pieces that have been covering the crypto markets over the last two days. So, bitcoin cryptocurrencies what’s going on what’s next it’s now time to be getting some cryptos all right. Well, bitcoin. We’re down 7.4 percent from the peak remember this was the level of watching 21 700 that yellow line many reasons why we’re watching that level and I’ve covered that in each video over the last several days in particular this pattern that we were looking at coming on this video a couple of days ago. Now, so that one is the critical one to go back. So, that you can catch up to understand that pattern. You can see these horizontal lines here why we’ve specifically chosen those levels why it’s important and what we can do to be on both sides of the market. There are still a few people who don’t understand that the markets are up down or sideways and no one can really know and they think you’re cherry picking.

It’s about understanding the probabilities and if you are wrong which there really isn’t a wrong you just have to be prepared for both. Then you can make money from both sides of the market and I think i’m only speaking to the few now because you are still here really getting it. I`m seeing it from your comments so thanks very much it does feel really good to see that and people are understanding it you know you put a lot of time into the stuff. People are getting it it makes it all the worthwhile so the thing that we’re looking at basically just as an update for today for the trades this market to get rejected at 21.7 and if we’re to see the fall. Let’s use the four-hour chart here that level to come back to 20 and a half using the previous low here now. If we use the bigger range low which is back at 17 and a half thousand dollars just to give you an idea. It’s at 20k, so that’s the 50 level and that’s basically the level that I’m looking for support for bitcoin now. It’s basically like the strong area that you could still look to take trades to the long side or if it breaks underneath the 50. Then I’ll be looking at possible trades to the downside.

If there was any sort of re-test of the previous support which now becomes resistant. Then you get the fall away which can set up for much higher profitable trades. I don’t like taking the lower possibility of trades. They’re just not that great to be taking. So, I like the stuff that looks and feels like a much more significant play to the direction that I’m trading so looking at it now. We got that breakdown so I think we’re going to come back and like I said. We’re looking somewhere around 20 20 and a half thousand which is this zone here and then of course the 50 level. So, that’s why we’ve picked those areas and basically just telling it like it’s a book or like it’s a story like it’s the actual news in real-time. You can see 20 500 here which are the peaks of the previous move up. So, that can make for some pretty amazing support and resistance levels should we get back there. So, we’re not too far off that at the moment maybe by the time this is posted and you watch it. We’re there bouncing away from that point to the upside we want to see it bounce, of course, and then put in some higher lows again on the shorter term time frames this sets up for longer trades and basically can set us in that position to re-test that 21 700 which has been a key level for the last three weeks where the market continues to break down from that.

Let’s say three probably two and a half weeks at this stage and then we go for that next peak at twenty-two and a half thousand dollars, so key levels for support twenty and a half thousand and twenty thousand they’re the key levels of support underneath that I would say it’s looking rather weak. If we did break 18 6 which is that low before the market did start to climb again. Then it’s not looking too good because you’re not far away from the next one and, of course, the breakdown starts from that point. So, we want to see those key support levels hold up which, then sets us in a good position for longer trades to the highest, now to the highs the breakouts 21 7 we need to get above 22 and a half thousand uh to get above as well which is that peak right there and then these little levels here. I don’t think you’re going to play too much of a roll but possibly the 50 back here the 24 6 which is the larger frame the bigger term time frame get past that we’re looking to. At least, re-test this low if not these lower levels at about 28 and a half. So, there could be some room to run on bitcoin and the reason why I see this stuff is really important.

It’s always so important to understand these levels because this is where the FOMO sets in so that has been a very common comment from you guys on a lot of these videos. It really does help when I do see your comments down there. I might not reply to all of them, but I get to read a lot of them at the moment the FOMO can set in as the market pushes up. Then if you’ve got these levels in mind you might avoid some of the FOMO buying bitcoin at these lower levels, 20k and under which we’ve looked at in that significant video a little further back. When I’m selling or at least it was one of those big bitcoin videos. It was looking at macro stuff that can set you up to not lose so much goddamn money by FOMO as the market runs up gets rejected at key resistance levels and then fades all the way back down.

We think I screwed up again how can I be so stupid. So, that’s really the reason for demonstrating where some of these key resistance levels can be. So, you don’t get caught up in the FOMO and you understand what probably will come next from a lot of Twitter and YouTube. All these sorts of calls for 28k or 31k which are these high levels here. They’ll just call a round number of about 30. that’s going to be the FOMO stuff. I think just like we saw previously in March and April. We were all looking for about 50 to 52k and the market fell short at 48k. Of course, we can look to those levels but when you get signals that the market is about.