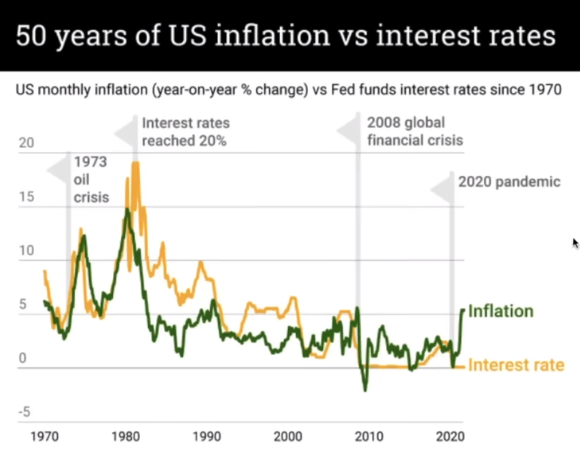 The upcoming Federal Reserve meeting is next week, specifically July 26th and July 27th. If you hold bitcoin, let’s talk about how you should prepare. Because right now, in 2022, the Federal Reserve interest rate is already up to 1.5-1.75%. That is nothing compared to what we saw in 2006, which was up to 5.25%. We can also compare it to around 2000, at around 6-7%, and, of course, back in the early 80s when the fed pushed the interest rates as high as 18-20% at one point to combat the crazy inflation. So knowing all that, understanding that right now we’re still only at 1.5-1.75% today, and then knowing that the next Fed meeting is upon us, it’s coming up. Let’s talk about what that means to me.

But before we go, it would be great if pay attention on the crypto copy trading Jet-Bot. It allows you to test your luck and become one of the best traders in the world.  All you need it just sing up and get notifications to Telegram. Jet-Bot is an official broker of the Binance crypto exchange. You can connect your Binance account to Jet Bot platform via secure Binance API connection and what is more, you don’t need to transfer funds to the platform. You hold your crypto in your own personal Binance account. Binance trading bot is guarantee of regular passive income, so independently choose any favourite trader to follow and become wealthy right away!

Let’s jump into gaining some perspective from veteran investor Mark Mobius. Now Mark has seen rate hikes, he has seen recessions, and he has seen inflation over and over and over again in his career, and he has great perspective on the standard playbook of the Fed. And remember, Jerome Powell has already stated that you should probably expect another 0.75% increase in next week’s meeting. But how far will this go with last month’s inflation numbers already at 9.1% percent? With 9% inflation, should we still expect a 75 basis point increase and then how much further up after that? This is about a 45-second clip. It sort of jumps right into it at the beginning, so pay attention from the start. Let’s read what there were said and then discuss it.

“I think we’re hitting the mark in terms of the United States in terms of hiking. What do you think?

I think I should stick to my initial statement that you’ve got to read the playbook of the Fed, which says that you’ve got to raise rates above inflation now that inflation is 9%. That means interest rates have got to go up to a higher level than that, assuming, of course, that inflation does not go down. But as it looks now, three-quarters of a percent is nothing.  Inflation has got to be 1%, 2%, 3% and rising in order to really attack inflation in the view of this central bank. I’m not particularly enabled by that approach, but that’s the point.”

Okay, short and to the point. I like it. If you hold bitcoin, let’s discuss what he just said and what this means to you.

In that last clip, Mobius was very clear that the standard Fed playbook is to raise interest rates at least above or equal to where U.S. inflation is. That’s true; notice how the screen in yellow represents inflation rates. Notice how the yellow often matches up or goes above what the green is to try and suppress inflation now.

This chart is a little out of date. Inflation numbers as of last month, year to year, like I said, inflation numbers were 9.1%. That means if nothing changes for the rest of the year, interest rates are at least going to be over 9% by year’s end or until inflation is subdued. People are speculating for the next meeting. Next week we are at least going to get 0.75 basis point hike. That is what Jerome Powell has hinted at and what we should be likely to expect. We saw a 0.75% increase last time. He said the same thing this time. The other speculation is a full 1% increase.

Will Bitcoin Crash After The Fed Meeting?

Let’s go into a little bit more detail on this. Inflation surged to a fresh four-decade high of 9.1% last month, and Fed officials, as well as other parties, are worried about a full one percentage point rate hike, expressing their preference for a more delicate 0.75 percentage point hike. Such a move would raise the federal funds rate to a range between 2.25% and 2.5%, which would still be at least 6 percentage points below the current headline inflation rate.

Now the Fed has told us what they expect for the end of the year. They expect the federal funds rate to eventually be around 3.4% by year’s end, while inflation is forecasted to be at 5.2% by year’s end. Obviously, from everything we know of the Fed, they have underplayed inflation over and over again. So, I would suspect this would probably be much higher and, whatever inflation gets to, I would expect the interest rate to grow to match, based on the history of the Fed. This matters to you and me for those who hold bitcoin. This dynamic is being closely watched in the bitcoin market partly because the price performance of the largest crypto by market cap, bitcoin has recently been correlated to all other major markets, meaning the more aggressive the Federal Reserve is, the more suppression comes to all major markets.

Let’s first finish this clip of veteran investor Mark Mobius giving his thoughts on when these rate hikes will end. Does he see the end of the year going further into next year? Also, although unasked, he does share his bearish thoughts on cryptocurrency.

“I don’t know what you mean, what you think. As far as duration goes, does that sound like a period of years to you or more than a year so that you wouldn’t be that bullish on the U.S market for another year?

You should keep in mind that the US market has already crashed. I mean, if you define a 20% decline as a bear market, we’re in a bear market already. It can go lower, and we’ll probably go a little lower, but the market has somewhat discounted a lot. But let’s keep an eye on bitcoin and the cryptocurrencies. All of those cryptocurrency exchanges are in trouble. I fear a real, further decline in cryptocurrencies have recovered a little bit, but if they decline substantially more, then that would be a signal that they have reached the bottom of the stock market as well. It’s really a very good sentiment indicator.”

Let’s break this down. On the one hand, he does give a sort of positive reminder that we are by no means at the beginning of this recession correction crash. Whatever you call it, we’re right in the thick of it. A lot of it has already happened, and although he can see another leg down for the markets.  In Mark’s opinion, we’re probably somewhere in the middle or closer to the bottom than the top. On the other hand, he comes off as ultra-bearish on bitcoin and crypto. But for those companies in the space that have been through bear markets before, nothing new usually happens.

Bitcoin in bear markets corrects at least an 85% correction for multi-miles. If we saw an 85% correction from the all-time high of around $69,000, that would take us to around a $1,000. I’m not saying it will happen. Maybe this was the bottom. I can’t see the future. I’m just DCA on the way down like everybody else. But if we dipped even lower, that would be normal for bitcoin based on past bear cycles. Well, obviously altcoins are more speculative and riskier. We all know this. They often oscillate around bitcoin when bitcoin pumps. When bitcoin dips, altcoins come down harder. Time will tell if altcoins tend to dip lower.