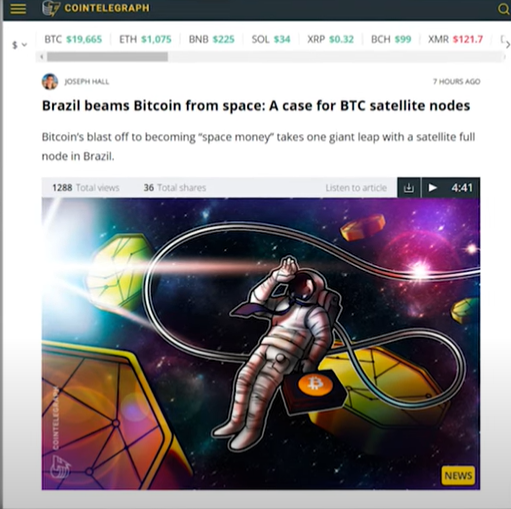 US inflation rate hits a 40-year record high. European Central Bank uses climate concerns as a “probable” cause to ban Bitcoin. Brazil begins to beam Bitcoin nodes from space. is your intergalactic crypto nightly news wrap-up. Let’s get it! In a major shock to the US markets today, inflation has hit a 40-year high of 9.1%, citing the energy index increases by 7.5%, and the gas index rose at a rate of 11.2%. Blame for the increases has predictably been put on the shoulders of Russia and Ukraine.

Because taking responsibility for shutting down massive amounts of American drilling would be a bridge too far for the current administration. Western sanctions imposed on Russia as punishment for the conflict have caused gas prices to soar in recent months, with no slowing in sight. This coupled with the US Dollar Index rally jumping to a two-decade high of 108.57 and the euro falling below the never before hit parity of the US dollar paints a complex financial landscape for NATO countries to navigate as record inflation is ravaging countries across the globe, with Turkey recently hitting a 78% inflation rate. Now, that is brutal.

The average person has felt the pinch much harder than institutions, with skyrocketing food, housing costs, a seemingly hawkish Federal Reserve planning to raise rates by up to 100 basis points in the upcoming meeting. The outlook for a supposed transitory inflation has now been long forgotten as companies dig in for the financial winter. In winter, it’s nice to light some candles. So, let’s go to our candle expert Frankie Candles for a market watch. Thanks, Ben! Alright, guys. Let’s jump in and do a little market watch here. We’ve got Bitcoin back over $20K. This thing straight up cannot make up its mind. Ethereum coming in at $1,113 Bitcoin up about 1.8% And Ethereum up about 2.5% Nothing too exciting on the top gainers or losers. So, I do just want to pull up the chart real quick for you guys here. Now, we have come down. If you guys are not in the Frankie Candle Discord, get in there. Because we did come down right to our target here, this spider line at about $18,980. We did dump right down to this level almost perfectly before finding some support and moving our way up past this local golden pocket in purple and right up to our point of control right here at about $20,400. So, the question is, are we starting to work our way up to the top of this bear flag? Or will we get a harsh rejection at this point of control?

We’ll have to let time tell. But we are about to have a money flow crossover on the one-hour, which is typically pretty bullish. Now, guys, again, you want to be careful. The mixed signals are still out there. We had a two-day red dot yesterday. And now it has just completely flipped over. And now we’re printing a green dot. So, the market is faking a lot of people out. So, just make sure you’re using your stop losses and good risk management.

If you like this content, go ahead and make sure to smash that like button and hit subscribe if you aren’t a part of the channel yet. European regulators are looking for scapegoats, and Bitcoin’s proof-of-work impact on climate is getting more attention. With energy rationing hitting Western European nations, a massive increase in price for oil and natural gas, and issues with alternative energy systems delivering needed output, Bitcoin mining is a target for lazy politicians to blame for not falling in line when the greenhouse gas savings initiatives don’t work. Now, natural gas has been shut off. The EU is starting up its coal power plants again as a temporary measure to combat current fuel shortages. In a recent ECB research article published, the carbon footprint of Bitcoin mining has been estimated to be similar to the energy use of some entire European countries. Concerns of increased financial exposure to the technology pose a climate transition risk to the traditional financial system. As it appears from this report, financial sovereignty is low on the list for regulators. They push the needle towards a net zero greenhouse transition. The conflict with a main energy exporter to Western Europe expands day by day. While these initiatives have been welcomed at principle, many within the crypto proof-of-work community are criticizing the lack of details, unreliable data and methodology used to contrive this initiative.

As Europe fast approaches what many fear will be a very cold winter in countries like Germany and Poland, warming centers are being deployed at breakneck speeds to ease the incoming energy squeeze. The first Bitcoin satellite full node has been launched in Brazil, negating the need for reliable internet connections and further decentralizing Bitcoin nodes into remote and hard to reach areas, with, get this, recycled DirecTV satellite dishes? Alessandro Cecere has taken advantage of upgrades within the Blockstream Satellite network saying that satellite full nodes are the next step to further decentralization of the Bitcoin network. We use the use case for satellite full nodes to have a very bright future. This technology has an especially strong use case for people and Bitcoin companies based in unstable governments, poor digital infrastructure and unreliable internet access.

The Bitcoin space signal does have some limitations. It’s finite yet boundless. Cecere calls this advancement a one-way street since one can only download data from it but not push any. Hence, they’re not capable of broadcasting transactions to the network. Blockstream looks to introduce a more advanced version of the satellite equipment which aims to enable those with extreme difficulties in connecting to the internet the ability to connect with the Bitcoin network. Bitcoin Gandalf of Braiins Bitcoin mining applauds this expansion, noting, “Using Blockstream satellite adds an additional level of redundancy should more traditional connectivity methods be interrupted.”