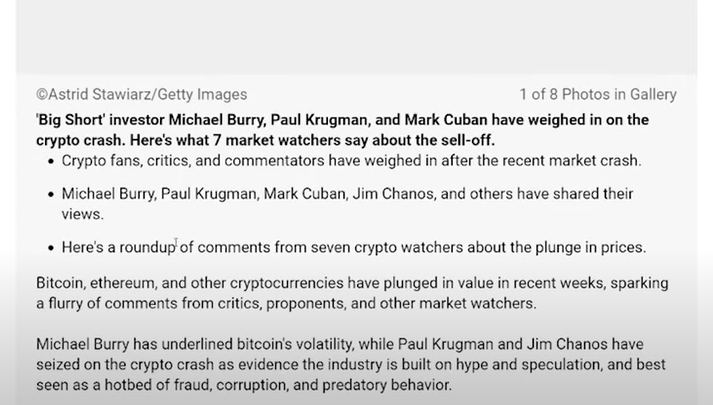 We have some big crypto news to talk about in the market today. So, we’ve got some very urgent security news that we’re going to be talking about Kevin O’Leary and what to watch out for in the crypto market. We’re also going to take a look at the crypto prices and what they are doing and where they can go in the future.

I want to kick it off with some critical security updates that we’ve had from CZ of binance right here and he says right here our threat intel detected a potential exploit on the Uni swap v3 on the Ethereum Blockchain the hacker has stolen 4295 ETH so far and they are being laundered through a tornado. Cash can someone notify Uni swap we can help thanks and now that is a big update right there and he says right here. He’s connected with the Uni swap team and the protocol is safe. The attack looks like a phishing attack. Both teams responded quickly, all good for the alarm, learn to protect yourself from fishing, don’t click on links. This is a great reminder there is so much. There are so many tricks out there in our cryptocurrency particularly in YouTube and on Telegram in particular telegrams are really bad lots of people on telegram trying to scam.

You just have to be very careful in the crypto space, so watch out if anyone ever sends you a malicious file, can even be a word document or a pdf. They can put spyware in that to that they can put viruses into that and get yourself a good antivirus program as well that can really help you out. But that’s just a reminder of some of the risks and rewards in the crypto space so even decentralized exchanges such as Uni swap. They can be potentially exploited on top of your centralized exchanges as well and have a look at some of this networking news from CZ Binance. This is the binance takeover of the world and he’s having dinner with president Macron. I’m not sure I’ve pronounced that right but uh he is uh making he is networking at the highest levels in France and that is interesting to see and he’s also fraternalizing with the enemy potentially here. This guy was a big fudder. I think he was the CEO or he still is the CEO of JP Morgan. He doesn’t like bitcoin, he doesn’t like crypto and CZ having a bit of fun with that one so caption this watch out for that and very interesting there. So, lots of big names in France networking and on top of that at the same time.

CZ is having fun there is a big fud happening for finance as well. So, apparently, they are allegedly serving Iranian customers, despite ban and sanctions. That is some other fight coming out for finance at the same time some positive news is coming out. That is an interesting development as well and have a look at this piece of crypto news we’ve also had as well. So, playboy launched the first meta mansion in the sandbox. So, the sandbox we’ve spoken about that crypto it’s basically a very high-quality blue-chip at cryptocurrency in the Metaverse spaces. The mother great metaverse cryptos, we did an update video on the channel a couple of days ago. But have a look at this one meta mansion getting launched by playboy, so playboy is set to add its web 3 offerings by launching a Meta mansion that will host gaming social and programmed events along with future NFT collectible releases from the firm so that is interesting. You can see the tweet right here. Have a look at this any bunny home, we’re teaming up with none other than playboy together.We will be creating a playboy meta mansion social inside the sandbox with NFT collectibles and special experiences for the rabbit playboy NFT community. So, that is an interesting update, and the cryptocurrency market the metaverse. It never fails to evolve and so playboy is getting involved with the sandbox. Again sandbox very interesting crypto. I do still feel the metaverse has lots of potential in the future still early days. But, that is a very exciting update right there.

Let’s talk about this big update from Kevin O’Leary. What is Kevin o’leary predicting in the crypto market he says right here. He expects a major capitulation event that will flush the bad actors out of crypto. So, that is what he’s saying so he’s expecting a major panic event that will trigger another crypto crash major firms like Celsius network and voyager digital have already collapsed as the industry suffers a liquidity crunch. There’s no big guy who has gone to zero yet that would be very healthy for the market so he’s kind of hoping for a big crash I don’t think this will probably materialize. In my opinion, so what you’ve seen in the crypto market is a lot of the smaller players kind of get moved out of the crypto market because they weren’t standing up to the rigorous standards of cryptocurrency where they had to repay loans. Kevin O’Leary is basically saying there could be a potential capitulation event, there could be further bitcoin sell-offs.

I’m not so sure about that. But that is what he is saying right there and he is saying it would be very healthy for the market. It educates the business models that aren’t going to work to some degree. That is true so those cryptocurrencies that do end up failing they couldn’t stand the crypto jungle, You have to remember in cryptocurrency right now. It’s almost like a jungle, so there’s lots of natural selection going on and those cryptos that are born to survive. They have that utility demand community ecosystem going. It’s a long-term journey they’re gonna survive. They’re gonna evolve, they’re gonna have stronger cryptos that may not have it all together they may wither in the wilderness so to speak but again at the same time. I’m very bullish on crypto. I do still think there are a lot of good projects out there to potentially look at.

Despite the crypto prices, they’re going down a little bit at the moment. So, if we check out the crypto bubbles today guys the crypto prices. They’re broadly down am I worried about this. No, I’m not worried about this a minute for the long run. Let’s check out the bitcoin price so again bitcoin is where is bitcoin sitting right now. It’s pretty comfy in the 20 000 zone at the moment. It’s still holding up relatively within the 20k range for bitcoin and uh that is interesting so 20k bitcoin and uh why is bitcoin hanging around in the 20k level. I do think it is correlated to the global economy right now. There is still some big economic uncertainty and you can see this article coming out of CNBC just fresh and it says Zelenskyi says Europe should prepare for Russia to cut off the gas supply. So, if the gas supplies get cut off to Europe that’s not going to be good for anyone. Again this conflict in Eastern Europe. I feel like it is dragging down the global economy. What do we want to peaceful resolution we want the countries uh to get back to being peaceful and then on top of that we want the global economy to become stronger. They are going to be the macro drivers that are going to increase the price of a bitcoin until then I think it’s going to be potentially sideways trading maybe a little bit of frost in the crypto market.