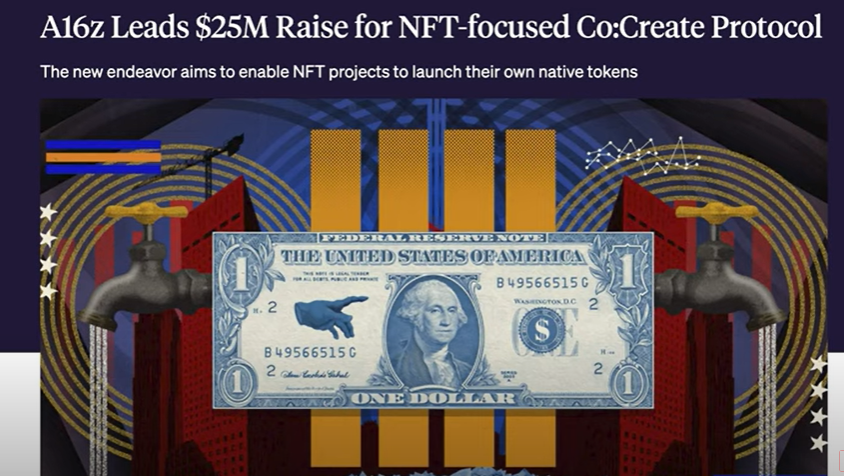 Yesterday after a week of voting on AIP-70, the APE DAO community voted 88% in favor to approve the funding to transform the Bored Ape Gazette into a 24-hour style news site. Estimated to cost $7,000 to $10,000 per month, the Gazette will include daily news, community events, APE DAO votes, classified ads, and even a live sales ticker for all Yuga Labs products. The ApeCoin Foundation is now going by the book from the DAO governance protocols to make the proposal a reality. A recent ApeCoin blog post states that they’re willing to pay APE community writers $100 an article for each published article and the website should be transformed within a quarter this year. The Gazette vote follows a recent push to pump out APE-related content as Coinbase released Part 1 of Bored Ape-themed animated mini series called The Degen Trilogy.

Although the 5-minute film was not well received, and the critics called it a Web3 cringe festival, I didn’t think it was that bad. I agree the plot was a bit confusing, but the animation was top notch, and it’s cool that they’re trying to break the mold and do something different. Looking forward to seeing the Bored Ape brand expand over time and break on through to the other side. What do you think would be a good addition to the Bored Ape Gazette? Let us know in the comments. Gary Vee’s popular NFT project VeeFriends is on the up and up. Nothing like getting injected with a healthy dose of institutional capital. VC firm Andreessen Horowitz has a crypto branch called a16z crypto, and they recently led a closed seed round to pump $50 million into VeeFriends. In a medium blog released yesterday, VeeFriends stated that they are using the money to build the intellectual property for their 283 characters across physical and digital multimedia platforms.

They also had mentioned that they’re planning on using the proceeds to recruit the best talent from the entertainment and Web3 industries. Not only is this bullish for Gary Vee’s NFT community, but it’s even more bullish to see VC firms that are ready and willing to expand into Web3. This isn’t a16z’s first rodeo either. Back in May, they also raised $25 million to help launch Co:Create, a protocol that helps other NFT projects get off the ground and start their own native tokens. VeeFriends has already racked up over 200,000 ETH in sales, and they’re not hesitating to evolve and expand into unexplored regions to take their project to the next level.

Let’s go, Gary! Not that Gary. Back in March, the North Korean hacker group Lazarus hacked the Ronin Network, which is the Ethereum sidechain that runs Axie Infinity. Six days after the attack, developers realized the Ronin Network got hit for around $600 million, making that the largest crypto hack in history still standing to this day. Axie Infinity’s developer Sky Mavis, a launchpad for blockchain games, admitted that the hack was possible because of a shortcut the firm took to relieve the user load on the network. The attack was carried out because a senior engineer at Axie filled out a fictitious PDF document disguised as a job offer for a company that didn’t even exist. Anyway, thanks to fellow YouTuber Asobs, it turns out that there were several questionable transactions from Sky Mavis’ CEO before the Ronin attack.

Asobs points out that Trung Nguyen’s wallet made a $3 million transfer in AXS tokens on Binance just 3 hours before the attack went noticed. Suspicious! Hmmmm? Nguyen responded to the claims in a lengthy Twitter thread saying that they did the transfer to be able to provide liquidity so that Ronin users would be able to withdraw AXS, SLP and wrapped ETH as soon as possible. He also claimed the accusations are baseless and false and that the team deposited $7.5 million from a known Axie multisig wallet to Ronin Network prior to the bridge closing to avoid triggering any short sellers watching. I’m not sure what will come of this or if they’re in hot water or not, but it is sus that he moved $3 million from Binance 3 hours before the attack had been noticed.

I get that they had to freeze the assets to prevent traders from shorting the news, but if you watch Asobs’ video in full, there are still questions left to be answered. We will keep you up to date on this story as it continues to develop. In the meantime, if you’re an Axie fan, be sure to check out the qualifiers for the Axie Infinity World Championship happening all weekend long.